Last week we discussed the Federal Reserve policy as one of the items weighing down market performance. Other items currently weighing on the  market are trade with China and the big sell-off in oil.  The last 5 days appear to have broken favorably.  Ultimately it’s the response from price action to news that we care about, and on that score, last Wednesday’s post-Powell move was among the strongest internal days we’ve seen for stocks this year.  It looks like we may get another shot to duplicate that strength on the back of the China trade truce, should we come to an agreement.  We do find it notable that neither the Powell speech nor the Chinese trade truce has been able to steepen the yield curve.  The 2yr/10yr curve is at 19 basis points this morning, essentially at the lows from late-August.

December has the highest % probability of a positive monthly return, checking in at roughly 75% since 1950.  Seasonality remains at the market’s back, but overbought conditions in neutral trends can be suspect.  Industrials have a historical tendency to do well in December and their message from here will also be key for the call.

The equity markets ended last week on a high note following Federal Reserve Chairman Powell’s comments on Wednesday that interest rates were “just below” neutral.  The market’s takeaway: the Fed will likely raise rates, as expected in December; rate hikes next year will be data dependent and may be slower than many analysts previously anticipated.  The equity markets jumped in response to Chairman Powell’s positive remarks.  For the week, the Nasdaq led (+5.64%) as technology stocks rebounded; the DJIA rose 5.15%; the S&P 500® Index rose 4.83%, and the Russell 2000® Index rose 2.96%.

On Friday, world leaders began a two-day G20 meeting in Buenos Aires.  Before the start, the U.S., Mexico and Canada signed the new North American Trade Agreement although the Agreement faces uncertainty in Congress.  President Trump and China’s President Xi met on Saturday; the U.S. and China agreed to a 90 day ceasefire on additional tariff increases in exchange for negotiations on China’s industrial policies.  The U.S. and Europe continue to negotiate trade issues; following General Motor’s announced closing of several plants, President Trump suggested that auto tariffs may be necessary.  Yesterday's market turnaround on the US and China trade news from the G20, shows how much trade is weighing on the market. Over the past few weeks, the global markets have fallen sharply due to concerns that a failure to end trade disputes would dampen global economic growth; also, the leaders of the major economies seem to realize that finding a solution is becoming more urgent.

Oil prices fell 22% in November as inventories have swelled due to a slower-than-anticipated implementation of the U.S. trade embargo with Iran and production increases by the U.S., Saudi Arabia and Russia.  Saudi Arabia and Russia may agree to reduce production at next week’s OPEC meeting in Vienna.  Analysts will closely examine the meeting’s results for insights into oil prices in 2019.  The drop in oil prices has benefitted consumers with more spending power; however, but further declines could reduce energy production in 2019.

Overall, the U.S. economy is doing well; the updated third quarter GDP reading remained at 3.5%.  Investment sentiment has improved along with the outlook for interest rates.  If the markets see tangible evidence that economic and political conditions are indeed improving, the equity markets could be poised for a December rally. 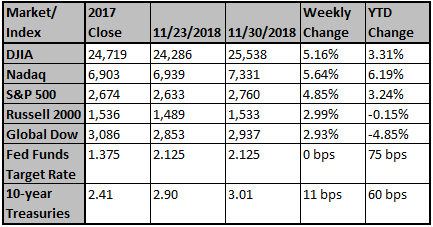 Federal Reserve officials said Thursday they still expect to raise interest rates again in December, but signaled that the path of policy in 2019 was much more up in the air.

UK consumer confidence slides to 11-month low ahead of Br...

Americans' spending rose more than forecast in October, giving the biggest part of the economy a solid start to the fourth quarter, while a measure of underlyuing inflation cooled to the ...