Big Week this Week...Hopefully We Will Get Some Clarity

Anxiety has heightened among investors and the wall of worry seems higher today than it was at the February market lows. Trade continues to be a prominent brick in the wall of worry and while it is a risk, it is manageable in our view. Even though it may seem like the US had a tough G7 meeting over the weekend. Data points (CEO Confidence, capex, unemployment, wage growth, PMIs, consumer confidence) still signal that there is time left in this business cycle and that the economy and markets can continue to climb the wall of worry.

The US is negotiating from a position of strength with economic tail winds around trade agreements. There appears to be a rotation underway in global growth rather than a major deterioration, with the U.S. improving and Europe, Japan and China marginally worse. U.S. economic fundamentals are very sound and there is enough momentum for a June Fed rate hike to be the base case. We may be headed for a 4% q/q annual rate for GDP in 2Q, but it is still tough to see a broad acceleration in the pace of interest rate tightening by the Federal reserve.

Despite headline events regarding U.S. trade Policies, all of the major indices rose last week; the DJIA outperformed with a 2.77% gain followed by the S&P 500® Index, Russell 2000® Index and the Nasdaq with gains of 1.62%, 1.49% and 1.21%, respectively.   Headlines regarding impending tariffs for steel and aluminum for Mexico, Canada, the European Union, and most Asian countries dominated last week’s news.  Notwithstanding President Trump’s statements regarding next week’s announcement of tariffs on a list of Chinese goods, trade talks between the U.S. and China continue. The markets continue to believe that negotiations will ultimately resolve these trade issues.

Elsewhere, the installation of new leadership in both Italy and Spain alleviated fears of any major disruption to the European markets.  This week, President Trump and North Korean leader Kim Jong Un are scheduled to meet to discuss denuclearization.  Also, central banks in Europe, the U.S., and Japan each meet this week; investors will look for any changes in monetary policies or outlooks.  The Federal Judge will also announce his decision regarding the AT&T and Time Warner merger.

The equity markets have continued to perform well this month against the backdrop of positive economic data. Investors appear increasingly confident that the equity markets are poised to continue their upward momentum following the February correction.  As companies head into the quiet period prior to second quarter earnings announcements, political and economic news will likely provide the market’s directional influences. 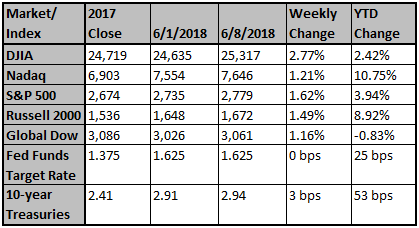 Guess What? Companies Are Bringing Their Cash Home

Tax reform seems to be working in at least one way.

Economic Report: The gig economy is actually smaller than...

The so-called gig economy is actually slighly smaller than it used to be, according to a new Labor Department report released Thursday that chronicles the jobs market in the age of Uber.

A large Chinese conglomerate is moving ahead with plans to acquire an American insurance company after a government panel that vets foreign deals for national security concerns dropped it...