Great showing by the consumer as Holidays are off and running

Yes, that's right, incomes are growing faster at the bottom of the income spectrum than at the top. A higher economic tide is lifting all boats and helping those with the smallest boats the most. This is not a recipe for stagnating sales... 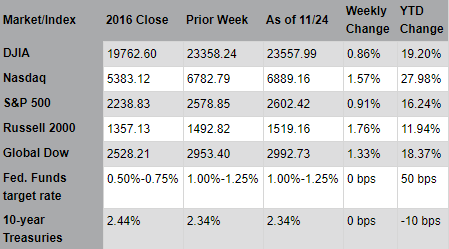 Now that Black Friday has come and gone and Cyber Monday is upon us, you're going to hear a blizzard of numbers and reports about the US consumer. So far, these numbers show blowout on-line sales and a mild decline in foot traffic at brick-and-mortar stores. Both are better than expected given the ongoing transformation of the retail sector.

But Black Friday isn't all that it used to be. Sales are starting earlier in November and have become more spread out over the full Christmas shopping season, so the facts and figures we hear about sales over the past several days are not quite as important as they were in previous years. Add to that the fact that this year's shopping season is longer than usual due to an early Thanksgiving holiday.

But all this focus on the consumer is a mistake. It's backward thinking. We think the supply side – innovators, entrepreneurs, and workers, combined – generates the material wealth that makes consumer demand possible in the first place. The reason we produce is so we can consume. Consuming doesn't produce wealth, production does.

Either way, we expect very good sales for November and December combined. Payrolls are up 2 million from a year ago. Meanwhile, total earnings by workers (excluding irregular bonuses/commissions as well as fringe benefits) are up 4.1%.

Yes, that's right, incomes are growing faster at the bottom of the income spectrum than at the top. A higher economic tide is lifting all boats and helping those with the smallest boats the most. This is not a recipe for stagnating sales.

And so the voices of pessimism have had to pivot their story lately. Just a short while ago, they were still saying the economy really wasn't improving at all. Now some are saying it's a consumer debt-fueled bubble.

It is true that total household debt is at a new record high. But debts relative to assets are much lower than before the Great Recession. Debts were 19.4% of household assets when Lehman Brothers went bust; now they're 13.7%, one of the lowest levels in the past generation. Meanwhile, for the past four years the financial obligations ratio – debt payments plus the cost of car leases, rents, and other monthly payments relative to incomes – has been hovering near the lowest levels since the early 1980s.

The bottom line is that investors should be less worried about consumer debt today than at any time in recent decades. Some think this could change if the Fed continues to raise interest rates, while selling off its bond portfolio. But interest rates are still well below normal levels and the U.S. banking system is sitting on trillions in excess reserves.

The US economy is less leveraged and looking better in recent quarters than it has in years. And better tax and regulatory policies are on the way. The Plow Horse is picking up its pace and consumer spending is in great shape.

The last week of November reveals some important economic information. The second report on the third-quarter GDP is out this week. The initial estimate in October showed the GDP increased at a 3.0% annualized growth rate. Also revealed this week is the report on personal income and spending for October. This indicator of inflationary trends is one of the economic reports relied on by the Fed in determining whether to raise interest rates.