Stocks pulled back last week during the holiday-shortened week as investors paused to assess the potential impact of multiple hurricanes, legislative developments, and ongoing tensions with North Korea. On Sunday, Hurricane Irma made landfall in Florida barely ten days after Hurricane Harvey caused historic flooding in Texas; and, this week, Hurricane Jose is expected to follow Irma’s path through the Caribbean. The natural disasters will sap economic activity in the third quarter; over time, though, rebuilding efforts should help local economies recover and boost growth. For example, damage from Hurricane Harvey will require the replacement of roughly 500,000 cars; insurance proceeds will fund the vast majority of these purchases. Congress quickly passed hurricane relief along with a three-month extension of the debt ceiling. President Trump, in making the deal with Democratic leadership, sent a message of compromise to Republicans. The agreement should enable lawmakers to focus on finalizing a tax reform package before the end of the year. Meanwhile, North Korea is expected to conduct another nuclear program test in the near future without any warning or advanced notice; the provocations have dominated headlines, but investors are taking a wait-and-see attitude for now. 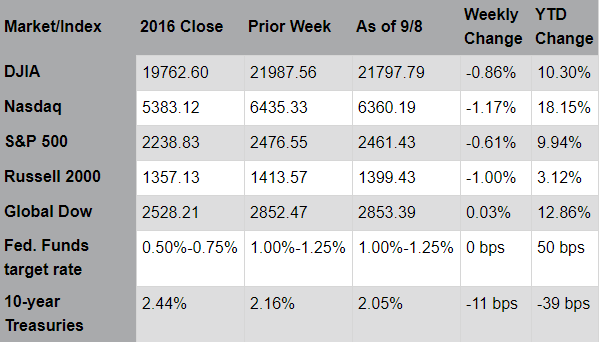 Interest rates fell to fresh 2017 lows on rising demand for safe haven Treasuries as well as reduced expectations for a rate hike before the end of the year. The market-based odds for a December rate increase fell to 31%, down from 42% last week. Federal Reserve officials cited the near-term impact from the hurricanes as well as persistently low inflation in potentially delaying further rate hikes. The subdued rate outlook is likely contributing to the dollar’s recent weakness; year-to-date, the greenback has fallen more than 10% to its lowest level since January 2015. Still, U.S. economic data remained positive: in August, the service sector continued to expand with increases in new orders and employment; and, business investment accelerated in June, with core factory orders (excluding aircraft) rising 1.0% month-over-month. The Transportation sector, a reliable barometer for economic growth, is also reporting robust activity; increased shipping volumes and pricing are driving demand for new trucks and equipment. Global economic data, however, were somewhat mixed this week: German factory orders declined 0.7% in July; Australian GDP (+1.8%) growth fell short of analysts’ expectations, and Japan’s second quarter GDP was revised from a preliminary estimate of 4.0% to 2.5%. Nevertheless, continued expansion in the major world economies should enable stocks to perform well once the overhangs of hurricane activity and geopolitical tensions recede.

Hurricane season is certainly upon us, and the financial effects of both hurricanes Harvey and Irma have been widespread. Inflation has been running cold and is not likely to pick up significantly. The latest inflationary gauges for consumer prices are out next week with reports on the Consumer Price Index, the Producer Price Index, and retail sales for August available.