Trade headlines are likely to continue dominating markets; that is, until the second quarter corporate earnings season begins in July.  The trade tensions between the U.S. and China continued.  Thus far, the Trump administration has threatened to impose tariffs on roughly $450 billion of Chinese goods, nearly equivalent to the total value of Chinese imports last year.  China promised a strong response including retaliatory tariffs as well as increased regulatory scrutiny on U.S. companies operating in China.  The dispute eased somewhat on Friday following reports that U.S. and Chinese trade officials may be seeking high-level talks to deescalate tensions.  Meanwhile, the EU announced tariffs on $3.2 billion of U.S. goods, including whiskey and Harley-Davidson motorcycles, in response to last month’s announcement that the U.S. would suspend steel and aluminum tariff exemptions for EU countries.  Then, on Friday, President Trump threatened a 20% levy on imported European vehicles, up from the current 2.5% import tax; the EU applies a 10% duty on automotive imports from the U.S.

The constant volley of threats is weighing on investor sentiment and undermining confidence in the global economic outlook.  In particular, Materials and Industrials stocks, which could be significantly affected by a global trade war, underperformed.  In contrast, small cap stocks, which are predominantly domestically-oriented companies, outperformed.  Year-to-date, the Russell 2000® Index of small companies has returned +9.8%, outpacing the large cap dominated S&P 500® Index (+3.0%) and the Russell Midcap® Index (+3.2%).  Energy stocks also rallied as OPEC and non-OPEC producers, most notably Russia, agreed to a modest increase in output.  Some had worried that the meeting would resemble the November 2014 agreement to protect market share; the ill-fated, Saudi Arabia-led policy precipitated the worst energy bear market in a generation.  Instead, the group opted for a nominal production increase aimed at maintaining price stability.  At current levels, oil prices support long-term project planning, for example, on offshore oil fields; no surprise, then, that some offshore drilling stocks rose as much as 10% on Friday.

The relative outperformance of small cap stocks indicates that investors may be shifting into areas that provide some protection from global trade disputes while also benefitting from strong domestic economic growth.  Moreover, the ongoing Energy recovery bodes well for future industrial activity, including manufacturing, construction, and transportation.  In conversations with company management teams, they cite increased difficulty in finding qualified employees, and rising prices for materials and services, while emphasizing robust growth opportunities. 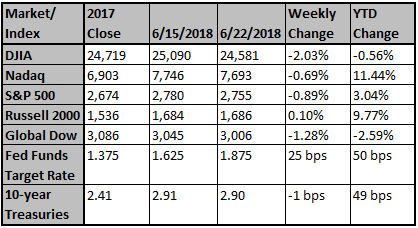