OPEC Agrees to extend production cuts and Oil prices drop on the news???? Stock market is still showing signs of strength based on strong earnings and revenues after the first quarter earnings wrap up….

Markets rallied last week; Technology stocks continued to lead the way, with the NASDAQ outpacing all other indices for the week as well as year-to-date. The notable exception, though, was the Energy sector which declined despite an extension of OPEC’s production freeze agreement (more on this below). Political headlines have mostly followed President Trump on his first overseas trip to Saudi Arabia, Israel, the Vatican, Belgium and Italy. The momentary reprieve from the domestic spotlight allowed investors to refocus on generally encouraging economic and corporate data. The estimate for first quarter GDP growth was increased to 1.2%, from the initial 0.7%, on stronger consumer spending and business equipment purchases. And, the preliminary reading for the Purchasing Manager’s Index of manufacturing and services activity rose from 52.7 in April to a better-than-expected 53.9 in May (readings above 50 indicate expansion). Economic conditions in other major developed markets are also improving; as such, investors are apparently reallocating assets to Europe and Japan to participate in growth opportunities as their economies accelerate. We added to our international exposure a few weeks ago and are now overweighting the sector. The value of the dollar reflects, in part, this transfer of funds; the dollar, which had risen roughly 30% from 2014 through 2016, has retreated approximately 5% in 2017. Further declines would effectively raise the costs of imported goods; the associated impact on inflation could, in turn, justify higher interest rates. These topics may well be discussed at the Federal Reserve meeting on June 13‑14.

As widely expected, OPEC agreed on Thursday to extend its production cuts through March 2018. The news fell flat, though; following the announcement, crude oil prices declined 5% and energy-related stocks sold off. Investors may have been disappointed that the group did not unveil a more aggressive policy, such as deeper cuts, a longer time frame for the agreement, or an explicit price objective. Perhaps more likely, the market was dominated by traders looking to turn a quick profit by “buying the rumor, and selling the news.” Meanwhile, U.S. crude oil inventories have declined for seven consecutive weeks; domestic supply should begin to fall more rapidly as peak driving season approaches. OPEC’s pact indicates ongoing cooperation among major oil producers, including Russia, and strong adherence to the terms of the agreement. Notably, U.S. shale producers are not party to the deal; indeed, OPEC is facing the harsh reality that the economics of shale oil will effectively govern their price and output objectives. The wide-ranging benefits for the U.S. economy of this “new world order” should include meaningful opportunities in areas such as manufacturing, transportation, petrochemicals and refineries, as well as crude oil and liquefied natural gas (LNG) exports. The emergence of U.S. shale as a permanent fixture in the world oil markets will have broad-ranging geopolitical and economic impacts for decades to come. 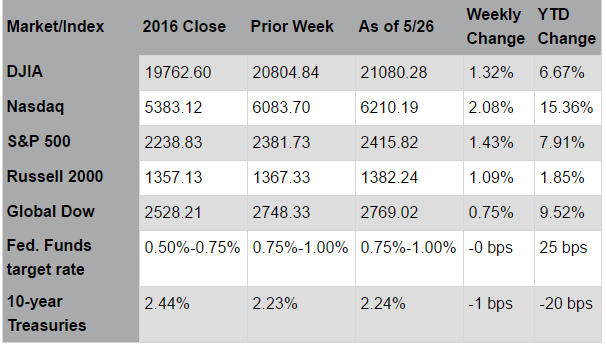 Memorial Day week unofficially kicks off the summer, which is typically a slower time for market activity. However, two important economic reports for May are out this week. Personal income and outlays looks at consumer income, spending, and price changes for consumer products and services. It is one of the main indicators of inflationary trends relied upon by the Fed. Also coming out this week is the May employment report. New hires kicked up in April following a weak March, although increases in average hourly earnings have only marginally surpassed the rate of inflation.