Yes, we really are in a V-shaped recovery and the economy is far from weak!

In a gallop poll out today:

Current Economy Evaluations Improved, but Have Been Better During Pandemic

The April ratings are not the best they have been for this aspect of the index during the pandemic. In November, positive evaluations of current economic conditions exceeded negative ones by 13 percentage points -- 36% to 23%. Several other months last year, Americans' ratings of economic conditions were similar to what they are now.

At their worst point during the pandemic, in late April and May 2020, negative evaluations exceeded positive assessments by 20 points.

There is an old saying “you are entitled to your own opinion but not your own facts”. We believe the times we are living in are very telling. Over the last six months, many market pundits have argued that because of the weakness in the economy we need significant stimulus to support it. The size of current (and past) stimulus efforts have truly been massive. The last Covid relief bill was $1.9 trillion, and it was passed before the last $1.0 trillion was even spent from the previous Covid relief package.

Fed President Powell and Treasury President Yellen continue to advocate for "significant" support of the economy. President Biden is expected to outline his next set of spending proposals, focused on social policies, ahead of his speech to a joint session of Congress on Wednesday. We expect that spending plan to come in around $1.8 trillion over the next eight years. The proposal to pay for this includes tax increases on "high net worth" individuals including higher income, capital gains, dividends, estate, and small business taxes. However, savings that would have been created from the inclusion of drug pricing proposals were removed late last week, leaving a sizable hole in the financing of the plan. We expect the combined $4 trillion infrastructure plan will not be easy to pass in a narrowly divided Congress.

While much of the public discourse focuses on how to pay for the proposed spending, we believe a fair question is, "Do we actually need the federal government to continue to stimulate the economy now?” The unemployment rate is falling at a record pace (well ahead of the most aggressive expectations). Net worth has increased for the "average" American, and through the already completed stimulus, the U.S has printed so much money that real inflation, the kind we have not seen for a long time, is a very real possibility. Historically, with the economic numbers we are currently seeing, the federal reserve would be starting to tighten its monetary policy (terminate quantitative easing programs and/or raise interest rates) to avoid the economy overheating. Today's federal reserve welcomes the signs of inflation they are beginning to see.

Where this will end is anyone’s guess because we are in uncharted territory. Fortunately, we can monitor economic and earnings data and watch for patterns. Here is what we are seeing now with the latest data from the second week of Q1 corporate earnings: 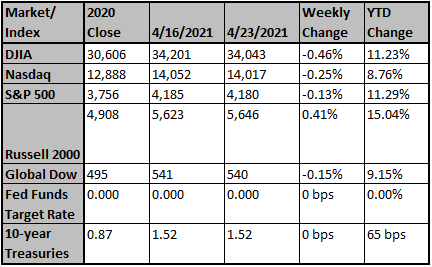 This week brings a full slate of economic data and central-bank meetings that are likely to show strong growth in the U.S. but uneven recoveries elsewhere around the globe.

After the worst year for the global economy since the Great Depression, the U.S. is set to lead a vigorous rebound in the West as mass vaccination against Covid-19 propels a return to mor...

The Fed's Next Test Is Breaking the Ice Over Policy Shift

Before the central bank begins to scale back support for the economy, it must first decide how to communicate the idea to markets.