4Q Earnings start to roll out and things could be choppy

4Q Earnings Season Could Be Choppy

From a macro perspective, we want to continue seeing NTM EPS march higher, which is exactly what is happening still. However, at almost $224 per share, the pace of the rise of NTM EPS has begun to slow in recent months as one would expect, but no alarm bells are ringing just yet.

We have been highlighting this for some time, but higher expenses are coming, as evidenced by the JP Morgan conference call. For the S&P 500 in aggregate, cost growth has surpassed the levels last seen in 2011. On the bright side, revenue growth continues to exceed cost growth, and as long as this occurs, we are not overly concerned. However, this presents a headwind on a company level as consensus is largely not pricing this in just yet.

The continued climb in oil prices presents a challenge for equities. While not detrimental to the point of negative returns, forward performance historically has been lower when the six-month change in oil price is positive versus when it is negative. In addition, with a weak retail sales number last week, discretionary company outlooks will be that much more important as spending shifts will likely occur.

Elected officials spent most of 2021 complaining that corporate taxpayers were skirting their tax payments and arguing that higher taxes on corporate income, multinationals, and capital investment were needed. But 2021 was a record year for corporate tax collections despite low tax rates. In total, companies paid $400bn in corporate taxes, up 87 percent over 2020 levels, and higher than the previous record of $372bn set in 2006. The $180bn year-over-year increase in tax collections is the equivalent of raising the corporate tax rate by 18 percentage points. 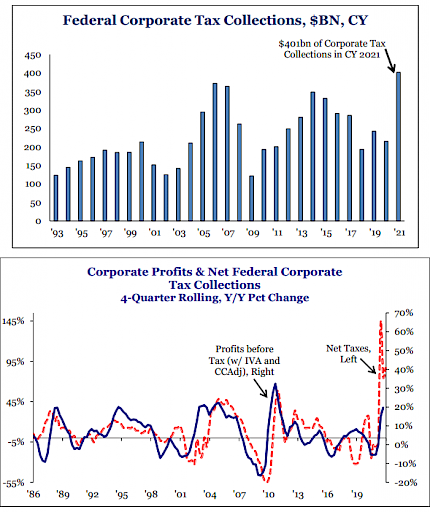 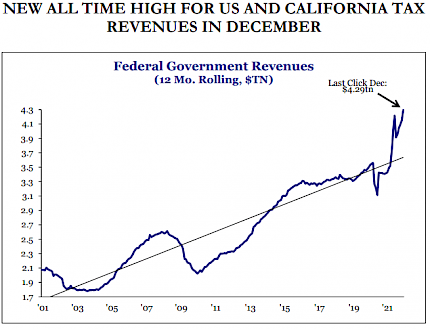 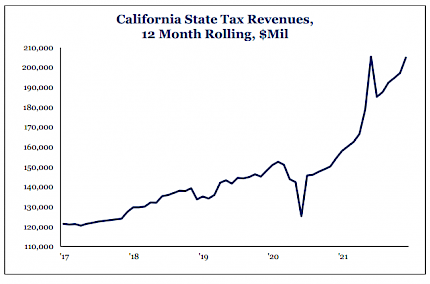 The federal deficit peaked in March at $4 trillion. Since then, it has declined by $1.5 trillion, or 37 percent. Tax revenues, bolstered by higher nominal GDP, income, and stocks have increased 2 percent of GDP and now stand at 18.9 percent of GDP. This is the highest level of tax collections in 20 years and will likely increase even more in early 2022 when capital gains taxes are paid. Corporate tax revenues for CY 2021 came in at $400bn, eclipsing 2006’s record of $372bn when the corporate tax rate was 35 percent. Spending has fallen by 6 percent of GDP and we expect more COVID spending to roll off in 2022. But spending remains elevated at 29 percent of GDP, significantly higher than the 20.5 percent of GDP long-run average and more reductions are needed to further improve the deficit. 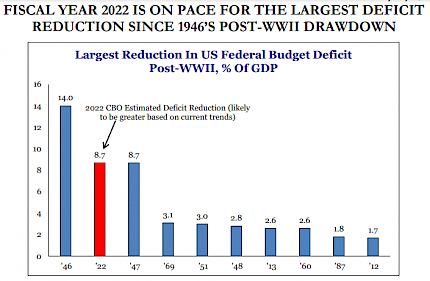 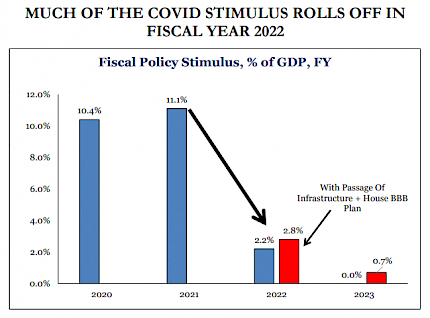 Washington Watch: The SEC's next regulatory target could ...

The SEC may set minimum standards for governance of securities indexes and mandate transparency regarding methodology, licensing fees and potential conflicts of interest.

The U.S. labor market is nearing, or may already be, at full employment, but a United Nations agency said that is far from true in many other parts of the world, with the Omicron variant ...