The equity markets struggled to advance last week with investors focused on the G20 summit in Japan.  Presidents Trump and Xi met on Saturday; the markets interpreted President Trump’s comments on Thursday to suggest a possible resumption of negotiations.  During the meeting the two leaders were able to come up with a resolution to keep negotiations on track. The Russell 2000® Index led all indices with a 1.10% gain; the other major indices declined for the week: the S&P 500® Index declined (-0.31%) followed by Nasdaq (‑0.32%) and Dow Jones Industrial Average (-0.45%).  The performance of the Russell 2000® has trailed the other indices following the suspension of trade negotiations; investors punished small company stocks, even though most small caps generate their revenues domestically, due to fears that prolonged tariffs would slow U.S. economic growth.  The gains late in the week for small and mid-cap stocks reflected the impact of the more optimistic outlook for trade negotiations.  On Friday, the reconstitution of the Russell Indices added and deleted various companies based on market capitalizations and recent IPOs.

In a quickly arranged meeting in the demilitarized zone this weekend between President Trump and Kim Jong Un, the two leaders agreed to restart talks over denuclearization. They agreed to designate nuclear negotiating teams that will begin work over the next several weeks. New working-level talks will probably start in mid-July, U.S. Secretary of State Mike Pompeo said. But the two sides don’t have a common definition of denuclearization.

Comments by Federal Reserve Chairman Powell reiterated that the Fed is grappling with the question of whether the “uncertainties will continue to weigh on the outlook and thus call for additional policy accommodations.” Many interpret these comments to suggest a willingness to reduce interest rates to extend the current growth cycle; the outlook for a rate reduction in July, though, based on new economic data and stagnant trade negotiations, is unclear.  The financial sector received a boost on Thursday when the Fed announced its CCR (stress test) report which approved the capital plans of each of the participating U.S. banks; the results authorize increased dividends and stock buybacks.  The capital return plans were more robust than analysts’ expected.

Oil prices increased this week on the expectation that OPEC and Russia will extend production cuts aimed at balancing supply and demand.  On Wednesday, the EIA (Energy Information Administration) reported a 12.8 million barrel reduction in U.S. crude oil inventories; the decline, the largest since mid-March, reflects demand from summer driving and increased exports; the increased costs, and risks to oil tankers in the Strait of Hormuz heightening the demand for U.S. oil. Investors continue to focus on trade and monetary events.  The second quarter ended on a positive note yet a renewal of trade renegotiations seems essential for continued market momentum.  Earnings season begins in two weeks; results will provide important information on company results through the first six months of the year and the outlooks for the remainder of the year.  Trade and monetary events, the main focus for investors, will provide direction for the equity markets. 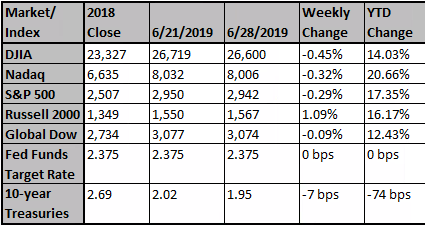 Markets cheered the resumption of negotiations between Washington and Beijing. Still, many doubt the two sides can reach a deal anytime soon.

Huawei has a chance to get its smartphone business back o...

Huawei has taken a big hit from a US-led campaign against it, but a new reprieve will give the Chinese tech firm an opportunity to recover lost ground.