All eyes on Corporate Earnings, Tax Cuts and of all things, Oil prices…..

Earnings are expected to come in well ahead of last year's numbers, despite a couple of notable misses this week (GS, IBM). Weak growth in 1Q16 provides an easy comp and improved nominal growth provides an additional boost for companies to report high single digit to low double digit Y/Y growth rates. S&P 500 earnings are expected to rise 10.8% Y/Y.

It is worth noting the double anniversary effect of Energy sector earnings weakness, which will mitigate the lift to earnings. S&P profit growth ex-Energy in the first quarter is expected to be 7.1% Y/Y, 3.7% lower than the headline number. The 2H16 strong patch also makes the comps more difficult later this year. While these factors may prove troublesome for the indices, it should allow healthy companies to shine and active managers to outperform.

Markets rallied last week as strong earnings results buoyed investor confidence.  Areas that are more sensitive to economic growth returned to favor: small cap stocks outpaced large caps, and industrial companies rallied while electric utilities lagged.  Energy stocks, though, underperformed as oil prices retreated; West Texas Intermediate crude, the North American benchmark, fell below $50 per barrel for the first time since late March.  Still, earnings conference calls emphasized improved outlooks for the sector as global crude oil inventories return to balance.  Core Labs, which analyzes reservoirs for major oil producers, estimated that demand is currently outpacing supply at a rate of 2 million barrels per day; accelerating depletion rates of existing wells will further exacerbate this shortfall.  The company foresees a tightening global oil market by the second half of the year, with declining inventories pushing prices towards $60 per barrel.  Meanwhile, Treasury yields, which remain near 2017 lows, reflect elevated geopolitical concerns: North Korea’s missile testing has raised tensions in Asia while Brexit-related headlines and Sunday’s first round of presidential elections in France have sharpened focus on Europe.  In the U.S., though, economic expansion continues, and business and consumer confidence remain strong; these conditions should provide support for stocks amidst global uncertainties.

Thus far, 19% of companies in the S&P 500® Index have reported earnings results; of these, 65% have exceeded analysts’ sales estimates, while 76% have exceeded analysts’ earnings per share (EPS) estimates.  Updated expectations for the quarter call for a 6.9% growth in overall sales and a 9.6% increase in EPS; both numbers would be the fastest pace since the fourth quarter of 2011.  Early estimates for the second quarter are also encouraging; analysts anticipate a 5.1% growth in sales and 8.3% growth in EPS.  The unfolding energy recovery is the largest factor in the improved corporate outlook.  The sector played an outsized role in the economic slowdown over the past two years; likewise, increased energy-related activity should provide a significant contribution to accelerating economic growth.  This week, earnings season ramps up with results from 189 companies in the Index including bellwethers such as McDonald’s, Lockheed Martin, PepsiCo, Procter & Gamble, Ford Motor, Southwest Airlines, and Chevron; also, major technology companies Alphabet, Amazon.com, and Microsoft.  The broad slate of earnings results should provide a comprehensive look into the current state of the economy as well as outlooks for the remainder of the year. 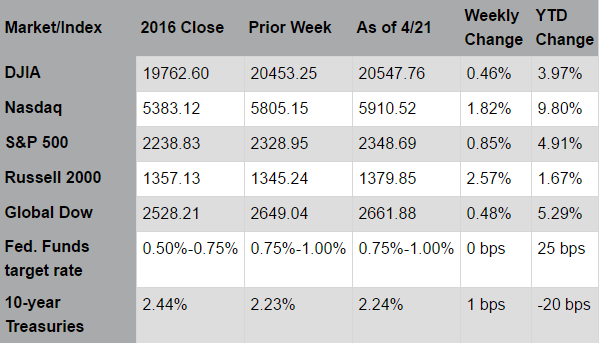 Initial estimates for the first-quarter GDP are out at the end of the week. Final figures for the fourth quarter revealed that the economy increased at an annual rate of 2.1%. A first-quarter rate at or below 2.0% may sway the Fed to hold interest rates at their current levels when the Committee next meets during the first week of May.