French elections and new tax policy…..Just what the market ordered

Stocks continued to rally last week following the first round of France’s presidential elections.  Centrist candidate Emmanuel Macron emerged as the favorite to win the May 7th run off vote against far-right candidate Marine Le Pen; the latest polls show Mr. Macron, a political neophyte, leading with 60% of the vote.  The two offer starkly contrasting visions for France and, by extension, the future of Europe.  Mr. Macron’s candidacy has been cast, especially in light of ongoing Brexit negotiations, as a re-commitment to the EU project which began in 1950.  In contrast, Ms. Le Pen represents a turn towards nationalism which many analysts believe may further splinter the EU.  Meanwhile, President Trump revealed his initial proposal for comprehensive tax reform; the package includes lowering the corporate tax rate, a one-time tax to repatriate cash held by foreign subsidiaries, simplifying individual tax brackets, doubling the standard deduction, and eliminating certain exemptions (while maintaining the current treatment of mortgage interest expense and charitable contributions).  Notably absent were measures to offset the expected reduction in tax revenues resulting from the various proposals.  Not surprisingly, the one-page announcement was seen as a preliminary bid in what will likely be an extended negotiation process.

The preliminary 0.7% estimate of first quarter GDP came in below the 1.00% forecast.  The slowdown in consumer spending, car sales and inventory growth weighed on the economy’s performance during the period.  Still, the report included several encouraging details: residential investment increased by 13.7% while non-residential investment grew 9.4%; and, final sales of domestic goods and services, which contributed 1.1% in the fourth quarter, improved to 1.6%.  The weak GDP report contrasts with better-than-expected corporate earnings reports.  So far, more than half of the companies in the S&P 500® Index have reported first quarter results; the 12.5% blended earnings growth rate is well above the 9.0% estimate at the beginning of the reporting season.  The forecast calls for a 7.5% increase in sales, the third consecutive quarterly gain, led by a 32.7% increase in the Energy sector.  The conflicting data may raise questions about the true state of the economy.  A closer look at other measurements, including robust business and consumer confidence readings, low unemployment and rising wages, suggest that economic conditions are better than the GDP report indicates.  For example, the forecasts for increased corporate sales and earnings (approximately +5% and +10%, respectively) through the remainder of 2017 support the expectation for accelerating GDP growth as the year progresses.

Many corporate executives are commenting on positive trends; the growth opportunities they anticipated following last year’s third quarter results are now more evident.  Comments from Energy executives, though, remain mixed as the sector’s recovery is still in its early stage.  Some reported improved earnings results, and more companies are discussing tangible growth opportunities.  The recovery in the Energy sector will generate additional growth in many parts of the domestic and global economies.  For these reasons, and absent any major geopolitical events, the equity bull markets should be sustainable. 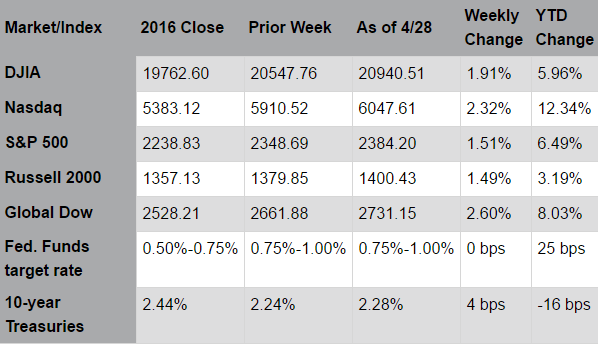 The all-important employment figures for April are out at the end of the week. March saw new hires for the month drop to under 100,000 for the first time in a long time. However, the unemployment rate fell to 4.5% while average hourly earnings continue to rise — all of which points to an expanding economy.