All eyes on First quarter Corporate earnings reports this week and oil makes a nice comeback…..

Markets last week varied from unchanged (for the Dow Jones Industrial Average) to modest, or more significant, declines for the S&P 500® Index, the NASDAQ and the Russell 2000® Index, respectively. The mixed results followed the midweek release of the Federal Reserve’s March meeting minutes. Discussions among Fed officials on the gradual unwinding of bond holdings, a process known as “balance sheet normalization,” unsettled investors.  Most members of the monetary policy committee anticipated the normalization process to begin sometime this year; the timeframe apparently surprised the markets.  We note that the timing, which reflects the Fed’s increased confidence in the economy, should bode well for companies and stock prices.  On Friday, the March employment report fell well short of expectations; yet, the unemployment rate declined to 4.5%, the lowest level since 2008, even as labor force participation has increased.  Moreover, harsh weather conditions during the period almost certainly contributed to the lower-than-expected job gains.  Other economic data this week offered some reassurance.  Car sales in March, albeit at lower levels than February, continue to track near historically high levels.  Heavy duty truck orders, meanwhile, jumped 42% as energy, construction, and transportation activity increased.  And, oil prices, which hit a three-month low of $47.70 on March 23rd, rose above $52 per barrel as global stockpiles are beginning to rebalance.

Earnings season starts in earnest next week with reports from JPMorgan Chase, Wells Fargo, Citigroup, and Delta Air Lines. Heading into the period, analysts expect companies in the S&P to report sales growth of 7.1% and earnings per share (EPS) growth of 8.5%.  The latter would represent an acceleration compared to the 3.1% and 5.1% EPS growth rates reported for the third and fourth quarters, respectively, of 2016.  At the sector level, Materials (+13.6%), Financials (+13.0%), and Information Technology (+12.8%) are forecast to produce the strongest EPS gains.  Energy companies are expected to deliver an impressive 36.9% growth in sales as the sector rebounds from last year’s extremely low activity levels.  Continued improvement in this important sector would further benefit the manufacturing, construction, and transportation industries in the quarters ahead.  Investors will be particularly interested in management commentaries regarding business conditions and the outlook for company-specific growth initiatives for the remainder of the year.  As a result, the earnings period will likely set the tone for markets over the next several weeks. 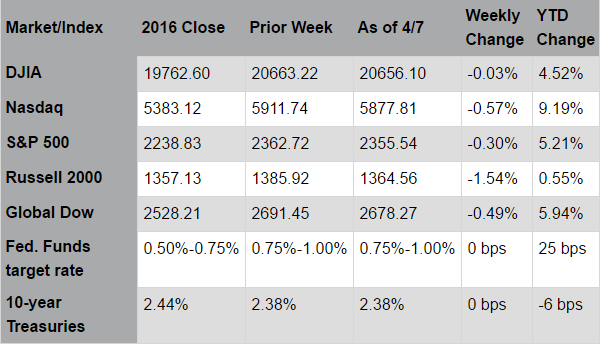 The week focuses on inflationary indicators as the latest information on consumer prices, producer prices, and retail sales becomes available for March. Also, investors will be watching for first-quarter corporate earnings reports, which should begin coming out this week.