Our hearts go out to the families affected by the devastation of Hurricane Harvey. The American spirit is alive and well as was demonstrated to us in last week’s search and rescue of the flooded areas. We wish all of our neighbors in Texas and Louisiana a speedy recovery.

Stocks rose last week on generally upbeat economic data and elevated expectations for tax reform, even as Hurricane Harvey inflicted major damage throughout Texas and Louisiana (more on this below). The September employment report showed continued job creation, though the gains were at the low end of analysts’ expectations; hourly earnings (+0.1%) rose less than expected and a 0.1% increase in the unemployment rate was also somewhat disappointing. Yet, other economic data were broadly positive: the revised estimate for second quarter GDP growth increased to +3.0%; consumer confidence continued to strengthen; and, manufacturing sector growth accelerated. Furthermore, increased industrial activity in China and Europe reflect growth in both domestic spending and exports. Meanwhile, the dollar has weakened 11% year-to-date against the euro; the pullback should benefit earnings for companies with foreign operations, while also helping to increase tourism-related spending in the U.S. This week, the White House began the drive for tax reform. While lacking specifics, early efforts may focus on lowering the corporate tax rate which would improve the competitiveness of U.S. businesses. Tax reform is high on the list of priorities as Congress reconvenes next week. Finally, North Korea’s launch on Tuesday of a missile, which traveled over Japan, continued the country’s show of force. Investors, though, seem disinterested; the CBOE Volatility Index (VIX) declined to levels preceding the escalation in tensions. 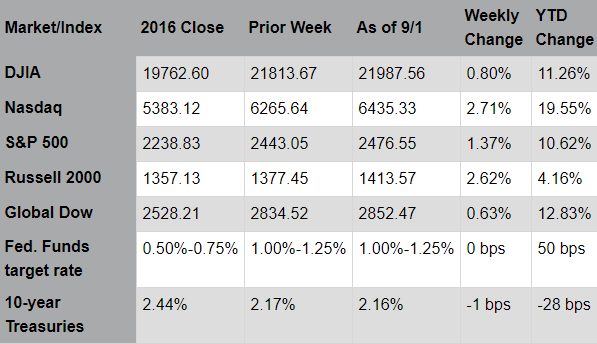 Hurricane Harvey will go down as one of the worst natural disasters in U.S. history, with severe flooding and catastrophic damage to homes, businesses, and infrastructure throughout the region. Moreover, the Gulf Coast is home to a substantial portion of U.S. refining capacity; gasoline prices across the nation have jumped due to the forced closure of many refineries. Estimates of storm-related losses, which currently range from $30 billion to $100 billion, make it the most costly natural disaster of the past 40 years. However, the post-disaster recovery will provide a regional economic resurgence as construction and replacement activities begin. Likewise, the disruptions for companies with significant operations in the affected areas will impact sales and profits for the third quarter; and yet, many of these companies may benefit over time. Examples of such businesses include: car dealerships, furniture and appliances retailers, industrial maintenance companies, and construction and engineering firms. Also, the tremendous effort to rebuild these communities should generate increased demand for labor along with higher wages which would, in turn, support service-oriented industries such as restaurants and retailers. These secondary effects will begin to materialize as early as the fourth quarter and continue for some time.

For the markets, August was a relatively quiet month despite North Korea and Hurricane Harvey. As investors return from summer vacation, trading activity should increase through the end of the year. Market focus will return to legislative action, third quarter corporate earnings season, and management outlooks for 2018.

The Gulf region continues to recover from the effects of Hurricane Harvey. It will be several weeks before the economic impact of that devastating storm can be measured. July's report on international trade for goods and services is out this week. Last week's report showed that the goods trade deficit expanded in July. Despite efforts on the part of the current administration to control foreign trade, imports continue to expand at a faster rate than exports, pushing the trade deficit higher.