Last week, a broad market rally led by small cap stocks followed the previous week’s selloff.  The Russell 2000® Index rose 1.45% while the other major indices also gained (the Dow Jones Industrial Average rose 0.64%; S&P 500® Index rose 0.72% and the NASDAQ gained 0.79%).  As expected, trading volumes remained low.  The annual conference of central bankers in Jackson Hole garnered attention although the meeting did not reveal any notable changes in Fed monetary policy. Chair Yellen stated that regulatory reform has been successful but some changes to reduce the regulatory burden may be appropriate to increase liquidity for bank lending.  Retail stocks gained with several companies, including DSW, American Eagle and Abercrombie & Fitch reporting higher sales and greater foot traffic.  The FAANG stocks, market leaders during the first half of the year, have retrenched over the past few weeks; some are in correction territory with losses in excess of 10%.  New home sales were notably weak as strong demand continues to far exceed the low inventory of new homes.  Overall, this was a quiet week beginning with the nation’s attention focused skyward at the solar eclipse and ending with the Jackson Hole meeting which produced no market changing events. 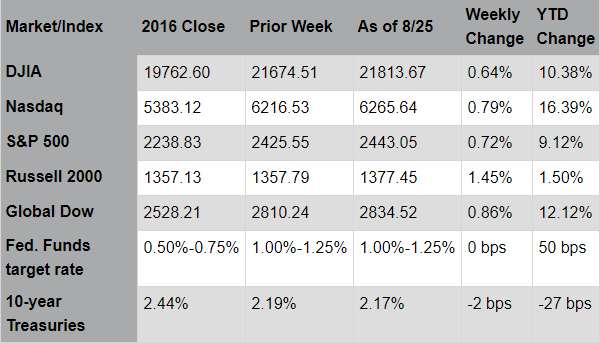 In looking ahead for the remainder of the year, the most frequently debated question is “What’s the likelihood of a significant market correction?”  Historically, bull markets can continue, with periodic corrections, over many years.  During an extended run, however, markets often experience rolling corrections across various sectors; this has been the case during the current bull market.  Stocks in the Energy and Industrials sectors have endured a bear market, Retail stocks have experienced a correction, and Technology may be entering a correction phase.  Several factors, including low interest rates, low inflation, and high employment levels, and moderate economic growth, support the extended bull market.  While too early to speculate, heightened discussions about the likelihood of tax reform suggest the possibility for a significant economic boost.  And, renewed efforts at deregulation are lowering business operating costs and providing growth opportunities.  Several factors, including an improving economic outlook, the disciplined approach shown by many companies in pursuing growth strategies, and investment-friendly monetary policies across the globe, support a more optimistic view of the market.  A recent report from the Organization for Economic Cooperation and Development (“OECD”), which tracks economic growth of forty-five countries, reinforces this outlook.  The OECD report states that, for the first time in ten years, all of the countries are on track for growth in 2017.  This report is consistent with the International Monetary Fund (“IMF”) which expects 3.5% growth in economic output in 2017 compared to 3.2% in 2016.  The IMF projects 3.6% growth in 2018.  Certainly, other catalysts could also accelerate growth and provide market momentum.  Market vigilance is always important, and unforeseen events can create disruptions; but, the near-term outlook remains positive.

Observers will be monitoring the lingering effects of Hurricane Harvey on the Gulf region and the storm's potential economic and market impacts, including possible increases in oil and gas prices. Other potential influences during the week will likely include the second estimate of Q2 GDP figures and the August employment figures.