Markets declined modestly in relatively light trading last week as political events continued to dominate headlines. Conservative areas of the market, including large cap stocks and Utility companies, outperformed while riskier areas of the market like small caps lagged. So far in the third quarter, the Russell 2000® Index of small companies (-3.9%) has significantly underperformed the large-cap dominated S&P 500® Index (+0.6%). Energy stocks also underperformed despite last week’s decline in crude oil inventories; the nearly 9 million barrel draw was a significant increase from the 5 million barrel average over the past four weeks. Economic data, meanwhile, continue to support a positive outlook. Retail sales were strong (more on this below), single-family housing starts continue to recover, and the University of Michigan’s preliminary Consumer Sentiment reading rose to its highest level since January. And, global GDP is projected to increase 3.4% in 2017 and 3.5% in 2018, compared to a 3.1% gain in 2016. Japan’s second quarter GDP rose to 4.0%, for the fastest growth since the first quarter of 2015. 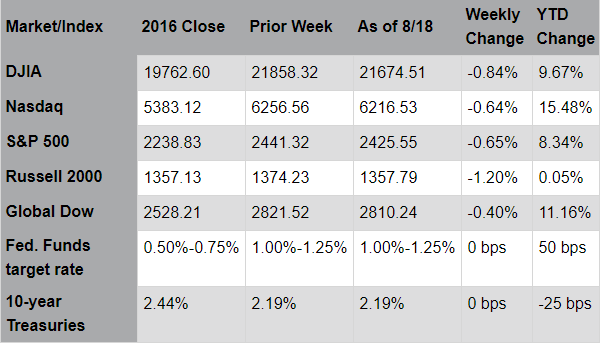 July’s retail sales rose a better-than-expected 0.6% compared to June, and 4.2% year-over-year. The increase provides an important context for this week’s busy retail earnings calendar. In general, the results underscored the substantial changes in the industry, including rising online competition and shifting consumer spending patterns. Home Depot reported a 5.5% increase in sales at stores open at least one year (“same-store sales”); the results reflect the strength of construction and remodeling activity. Off-price retailers TJX Companies (owner of TJ Maxx, Marshalls, and HomeGoods) and Ross Stores reported same-store sales growth of +3% and +4%, respectively; the “treasure hunt” aspect of off-price stores is difficult to replicate online. Sporting goods retailers, however, struggled in the face of online competition; in particular, Foot Locker’s same-store sales declined 6.0% as excess inventory led to elevated discounting. We note, though, that apparel and footwear manufacturers prefer a balanced distribution strategy; they typically rely on physical stores to showcase their best products. Indeed, thus far, most have primarily utilized online channels such as Amazon to clear lower-priced goods. Finally, the 8.0% decline in same store sales at L Brands (owner of Victoria’s Secret and Bath & Body Works) showcased the weakness in mall-based traffic. All in all, the results call attention to the potential investment risks, and opportunities, that may arise from the broad changes across the retail landscape.

August is typically a quiet month for the markets as traders go on vacation and corporate earnings season winds down. For the next several weeks, trading volumes will likely remain light. While domestic and geopolitical headlines may contribute to elevated volatility in the near-term, the longer-term outlook for stocks derives principally from economic growth and corporate profits. Thus, and despite recent weakness, the improving global economic outlook coupled with low inflation and interest rates should support the equity markets.

Stocks were unable to shake a recent slump last week. A week without violence would go a long way toward quelling investor concerns and pushing equities higher. On the economic front, the housing sector is an important gauge of economic momentum. In the first quarter, sales of new and existing homes were robust. However, lack of inventory and rising prices have stymied sales during the second quarter. High demand for housing may be a sign that people are comfortable enough with their financial situation to make a large purchase. However, the lack of inventory means builders can't keep up with the demand for new housing, and home owners aren't inclined to sell their current homes. This week's reports on sales of new and existing homes in July may shed some light on whether sales are picking up or lagging.