Big job report flies in the face of Recession fears….Wages continue to grow for the working class

Most of the major indices closed fractionally lower for the week even after Friday’s jobs report, an unexpected gain of 266,000 jobs in November, provided the markets an early holiday gift. The estimates, 187,000 non-payroll jobs would still have been an improvement over Octobers’ upwardly revised 156,000 new hires. The unemployment rate fell to 3.5%, a 50-year low; wages increased 3.1% year-over-year. Also, the Michigan consumer confidence index rose to 99.2 compared to estimates of 97.0. For the week, the Russell 2000® Index rose 0.57%, The Nasdaq fell 0.10%, the Dow Jones Industrial Average fell 0.13% and the S&P 500® Index fell 0.16%. The S&P 500® Index, the Dow, and the Nasdaq closed fractionally lower than late November all-time highs.

The roller coaster of trade narratives between the U.S. and China continued as President Trump’s scheduled December 15th deadline for tariffs on Chinese goods approached. President Trump suggested that he was in no hurry to end the trade war, and might be better off to finalize a trade pact after the 2020 elections. The rhetoric however improved throughout the week as both U.S. and Chinese officials indicated that talks were going well and an agreement was near; on Friday, China announced a waiver of import tariffs on shipments of American soybeans and pork.

On Friday, OPEC+ (including Russia) announced an agreement to further reduce oil production by 500,000 barrels a day (bpd), to 1.7 million bpd through March. This decision is aimed to avoid an increase in supply as data reveal a tariff-related slowdown in economic growth. The Federal Reserve meets next week. The markets anticipate no change in interest rates; analysts, however, will scrutinize post-meeting commentary for any potential policy changes in 2020.

So far, the month of December performance, with a positive jobs report and more potentially encouraging commentary on trade negotiations for a Phase One agreement, is a welcome change from last December’s selloff. Then, the collapse in oil prices, trade disputes, the Technology selloff, and an interest rate increase aroused fears of a looming recession. As we near year-end, trade will continue to determine market momentum 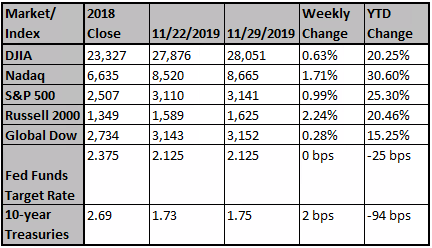 Who goes to the desert oasis?

U.S. stocks are edging lower, one session after a stellar jobs report ignited bullish sentiment on Wall Street, as investors brace for a wave of policy updates from global central banks a...

For the first time, U.S. manufacturing workers with college degrees will soon outnumber those without. It's part of a shift to automation that has increased factory output, opened opportu...

Additional China tariffs not likely to come into effect: ...

Wilmington Trust chief economist Luke Tilley discusses the likelihood of a trade deal with China, the importance of USMCA and the state of the U.S. economy.