Consumer confidence rose to its highest level in almost 17 years

Markets were mixed Last week; strong economic data and the release of the House’s initial tax reform plan were unable to spark a rally in stocks. The U.S. economy added 261,000 jobs in October, the largest monthly gain since July 2016, as employers recovered from Hurricanes Harvey and Irma. The unemployment rate fell to 4.1%, its lowest level since 2000; wage growth was essentially flat month-over-month, but may pick up over the next few months. Consumer confidence rose to its highest level in almost 17 years; respondents noted an improved short-term outlook and strengthening business conditions. Home prices continued to gain (+6.1% on a twelve-month basis), while automotive and commercial truck sales exceeded expectations. The ISM manufacturing and services indices both pointed to robust growth in the overall economy; the latter posted its strongest survey result since August 2008. In addition, global economic conditions are the strongest they have been since the financial crisis, with Europe, in particular, showing accelerating growth. The Eurozone manufacturing PMI registered a reading of 58.5 (50 or above indicates expansion); Germany led all member countries with a 60.6 reading, followed by Italy (57.8), and France (56.1). And, the U.K., which continues to work through a complicated Brexit process, reported its strongest level of service sector activity in six months. 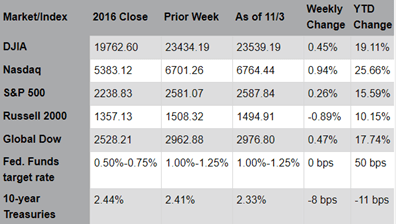 The favorable fundamental backdrop is further supported by the prospect for comprehensive tax reform. Last week, the House released its initial plan. Notable elements include a reduction in the corporate tax rate to 20% (down from 35%) and a one-time 12% tax on cash repatriated from foreign subsidiaries. These business-friendly initiatives would help level the playing field for U.S. corporations, and might encourage some companies to re-domicile their headquarters in the States. Smaller companies, which typically concentrate in the domestic market, stand to benefit most from the proposed changes. Other aspects of the plan will likely be subject to intense lobbying and negotiations, including the proposed elimination of state and local income tax deductions and the reduction in the mortgage interest deduction. Nevertheless, the House plan is an encouraging starting point which could ultimately spur significant investments by U.S. businesses. The proposed bill now goes to the House Ways and Means committee; in the coming weeks, the Senate will release its version of the bill which will be subject to similar scrutiny. Also this week, President Trump tapped Jerome Powell as the next Federal Reserve Chair. Mr. Powell currently serves as a governor on the Federal Reserve Board and is expected to broadly continue the current framework on monetary policy.

Third quarter earnings season is winding down; over 80% of companies in the S&P 500® Index have reported results. Overall, earnings are expected to have increased +5.8%, an improvement from the original forecast of +1.7%; and, sales are expected to have increased +5.8%, ahead of the +5.0% initial estimate. Investors will begin shifting attention back to the economy and outlook for next year. Solid global economic growth, hurricane recovery-related activity, rising oil prices, a strengthening industrial economy, and prospects for tax reform should provide meaningful tailwinds heading into the final two months of the year, and into 2018.

This week is a relatively slow one for economic news. Third-quarter earnings reports are still filtering in, helping to push stocks higher. However, the impact (if any) on the market from the first indictments out of special counsel Robert Mueller's investigation is still playing out. Last week's FOMC decision to maintain short-term interest rates may nudge investors toward equities.