Earnings, Revenues, GDP and Inflation all run hot and still no raise in interest rates in the near future

Bottlenecks have been larger than anticipated. Inflation is starting to register on the D.C. political radar, but a wait-and-see approach is still favored. U.S. inflation is (still) viewed as transitory. Recent U.S. bond market moves have not scared the Fed. The 10-year Treasury finished last week at 1.22%.

As we noted last week, the rise in inflation is pushing down real (inflation-adjusted) spending & GDP growth. U.S. nominal GDP was +13% q/q A.R. in 2Q, but inflation was 6%.

Consumer spending contributed +7.8% points to 2Q real GDP growth, indicating strong U.S. demand. But the supply side of the economy remains challenged. Capex added +1% point, housing was -0.5%. Inventories subtracted -1.1% points with trade at -0.4%. The government was -0.3%.

The Fed wants to look thru supply shocks. The FOMC held interest rates near zero last week. However, the economy has made progress toward the Fed’s goals. For now, the central bank will keep buying $80 billion of Treasuries and $40 billion of mortgage-backed securities (MBS) each month. But the clock has started on a QE taper. There probably should be a future Fed speech or meeting statement that upgrades “progress” to “substantial further progress”. That language could signal a QE taper at the next meeting.

Powell noted that MBS purchases were generally considered to affect financial conditions in a similar way to Treasury purchases. There was little support for tapering MBS earlier vs. Treasuries.

There continues to be legitimate “peak growth” concerns. U.S. durable goods orders rose 0.8% m/m in June, though the prior reading was revised up to 3.2%. Core capital goods shipments rose 0.6%. These are not bad numbers, but were somewhat below elevated expectations m/m.

We continue to watch U.S. consumer confidence closely. Fortunately, the Conference Board’s measure improved m/m in July, giving some breathing room. If confidence were to make a new low, the yield curve (2yr/10yr) came close to inverting, or schools were to close in the fall, the chance of a more dramatic downturn (not just a “second-derivative” slowdown issue) would intensify. We’re staying tuned.

After another 35% of the S&P 500 companies reported earnings last week, every sector saw an improvement in both their estimated sales and earnings growth rates for the 2Q reporting season. Revenue growth is now expected to be nearly 22%, with earnings growth just shy of 90%. Equity prices have already been priced in many of these strong earnings reports as performance was underwhelming.

In aggregate, the S&P 500 2021 EPS figure is now estimated to be greater than $200 a share. This is up more than $9 from July 1st and more than $30 from January 1st. We know that companies have seen drastic improvements in margins during the 1st half of the year. The question for the 2nd half now is, are those margin improvements sustainable.

Strong earnings reports for 2021 and lack of significant revisions higher to 2022 estimates is leading to a 2022 earnings growth rate that continues to slide lower. Currently, 2022 earnings growth stands just above 10%, which is well above long-term historical averages but is down significantly from the 16.7% expected in January. How the potential headwinds to earnings in 2022 such as a higher corporate tax rate & rising costs play out will be deciding factors for earnings growth next year.

Mentions of “Shortages” Continues To Rise In Transcripts

After a dip in June, likely due to the lack of earnings calls despite an increase in documents analyzed, mentions of “shortages” accelerated in July. The rolling 3-month sum showed no signs of slowing down. Despite the abundance of fiscal stimulus being provided, there is a natural limit as to how strong growth can be if goods consumers are looking to purchase simply do not exist.
Source: Strategas 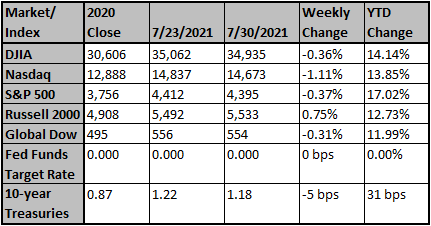 The U.S. employment report for July is the focus of this week's economic indicators.

Fed Chairman's Approach to Regulation Has Drawn Some Crit...