Trade concerns continue, despite stronger-than-expected earnings results, to cast a shadow over the equity and bond markets.  Last Thursday, President Trump, dissatisfied with trade negotiations, threatened to implement a 10% tariff on September 1st for the remaining $300 billion of Chinese exports not already subject to tariffs.  The markets immediately sold off on fears that an expansion of trade tariffs with China would further damage the U.S. economy.  Last week, Nasdaq declined 3.92%; S&P 500® Index fell 3.10%; Russell 2000® Index (-2.87%); and Dow Jones Industrial Average

The predictable reaction reinforces the markets’ unease with the unknowns in the escalating trade disputes.  If enacted, the latest tariffs would hit consumer goods; the actual pocketbook impact, though, is less clear as changes in currency values (the Chinese Yuan is weakening relative to the dollar), and pressure on manufacturers could limit price increases.  So far, many manufacturers have agreed to negotiated discounts to protect market share and jobs.  Also, the terms of the September 1st tariffs are not onerous; the intention may be to prod negotiations.  The Chinese government, in indicating that it would respond, also added that they will engage in “intensive contact” with U.S. negotiators to establish “good groundwork” for discussions slated to resume on September 1.  Meanwhile, the escalating trade dispute between Japan and South Korea has no resolution in sight.

Last Wednesday, as widely expected, the Federal Reserve cut the fed funds rate by 25 basis points.  The Fed also announced an early end to quantitative tightening; looking ahead, the proceeds of maturing bonds in the Fed’s $3.8 trillion asset portfolio will be reinvested.  Chairman Powell stated, “We’re thinking of this as a mid-cycle adjustment to policy.”   He later added, “I said it’s not the beginning of a long series of rate cuts.  I didn’t say it’s just one or anything like that.”  The Fed also cut the interest rate on excess bank deposits from 2.35% to 2.10% to spur lending activity.

Earnings season has been much better than feared.  Over 75% of companies in the S&P 500® have reported results; of these, 76% exceeded analysts’ modest expectations by more than 6%.  Commentaries, not surprisingly, remain cautious on tariff issues yet most companies assess their business outlooks favorably.  Consumer spending, which continues to fuel the economy, more than offsets a slowdown in business investments and manufacturing.  The July jobs report supports this optimism as the unemployment rate remains at 3.7% and hourly wages increased 3.2% on an annual basis.  Lower fuel prices also provide additional discretionary spending power.

This week essentially ends earnings season.  Investors, in looking ahead to the traditional slow period for the markets, will now turn to evaluating the potential impact of additional tariffs as well as the potential benefit of additional interest rate cuts.  Market momentum will like be determined by headline news, tweets and further Fed commentary. 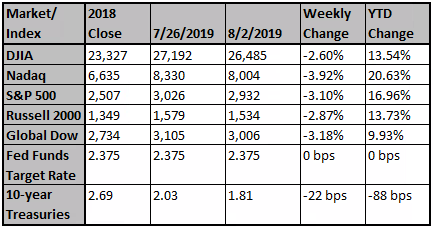 Market Extra: What a falling Chinese yuan means for the s...

China's yuan currency tumbled Monday, breaching a level long described by market watchers as a "line in the sand" and feeding fears of an intensifying Sino-U.S. trade war that sparked a g...

The economy created a steady 164,000 new jobs in July, underscoring the strength of a robust U.S. labor market that's shown little sign of deterioration even as the economy faces stiffer ...