Can China really afford to play the long game on trade?

The term “trade war” seems appropriate in describing the escalating dispute between the U.S. and China. A week ago Friday, President Trump’s announcement a September 1st tariff increase; on Monday, China, announced it would stop buying American agricultural products and allowed the yuan to devalue to levels not seen since 2008. Subsequent commentaries speculated on the economic impacts to each side as the markets sold off and then largely recovered. Then on Friday, President Trump indicated that a scheduled September meeting might be cancelled; the resulting selloff sent the markets lower for the week: the Russell 2000® Index declined 1.34%; the Dow Jones Industrial Average (-0.75%), the Nasdaq (-0.56%) and S&P 500® Index (-0.46%).

Investors fear that the most recent escalation in rhetoric will slow global economic growth and perhaps lead to a recession. Chinese officials stated that they would support the yuan; the alternative, a further devaluation could potentially destabilize its economy by creating a flight of capital and increasing the risk of bankruptcies for Chinese companies with dollar-denominated debt. Also, China’s decision to forego imports of U.S. agricultural products may be problematic as replacement countries, such as Brazil, may be unable to meet the demand.

Unlike one year ago when President Trump was calling the trade shots, investors now need to be focused on what President Xi will do. Joe Biden’s dovish trade stance, and frontrunner 2020 candidate status, may even result in China slow-walking a deal.

The longer China waits to make a trade deal, the more US Companies will look at changing their supply lines (This is already going on). If US Companies decide to change where they manufacture their products from China to other countries (or even back to the states), China would be losing economic revenue they may never get back. If that is the case, it would be like taking four steps back to take one step forward. In other words, China has grown its infrastructure to support a certain growth rate on a leveraged basis. If their economy slows and they cannot get that growth back, they will be putting pressure on its future growth prospect and could have a hard time paying its debts in the future. If China looks to wait and see who wins the election in 2020, it is our opinion that they will have waited too long and the damage to their economy could potentially be far reaching.

The chain that continues to impact the economy is: 1) trade matters for manufacturing 2) manufacturing matters for profits; 3) profits matter for future business spending (capex + employment). This is what central banks are starting to offset (especially as this hit has flowed thru to future pricing & inflation expectations).

The U.S. economy is showing signs of slowing as companies delay planned investments because of trade uncertainties. For now, consumer spending is largely filling some of the void but buyers remain cautious. The flight of capital to safe haven U.S. Treasuries sent the yield on the 10-year Bond to a three-year low of 1.71% while the 30-year bond neared an all-time low on Wednesday. Homeowners are refinancing to take advantage of lower mortgage rates.

Despite the market turbulence last week, investors rewarded companies which reported strong revenue and earnings. Largely, however, the markets will likely react to news headlines for the latest updates on trade negotiations. 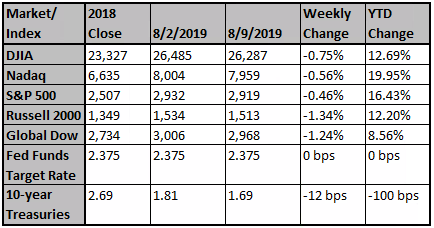 1. U.S service providers signalled a solid start to the second half of 2019. July data indicated a faster rise in business activity, supported by more robust domestic and foreign client demand. New orders increased at the quickest rate since March and new business from abroad grew at the stronges...

China trade fight seen dragging on through 2020 in threat...

The White House's escalating trade fight with China is increasingly likely to drag on through the 2020 election, handicapping the U.S. economy and potentially endangering President Trump'...

Stocks stumbled Friday as worries flared yet again that President Donald Trump's trade war with China may be worsening. It was a fitting end to a wild week...