One of the oldest adages on Wall Street is that investors are always worried about something. This summer, the markets are looking supportive of that old rule: When investors can’t find anything worth worrying about, they worry about why no one seems to be worrying enough.

“The global market’s ongoing low volatility should be unsettling for investors,” portfolio manager Brian Singer of William Blair & Co. wrote earlier this month, and just about every client I’ve spoken to in the past few weeks has echoed that idea. 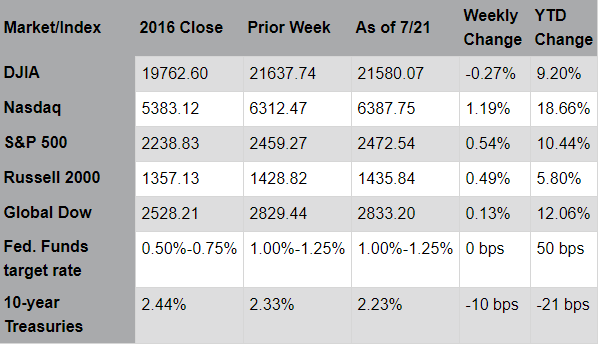 Tax reform is stalled, global alliances are fraying , the health-care plan is in the emergency room — yet U.S. stocks are not only at record highs but fluctuating less (by some measures) than at any time since 1993. It’s that calmness that is making many portfolio managers jittery. However, as we know markets follow earnings and revenue growth of its underlying companies to make new highs. Based on Q2 earnings it looks like more of the same as the market continues to climb the wall of worry.

Thus far, 97 companies in the S&P 500® Index have reported second quarter earnings results; of these, 71% have exceeded sales estimates and 72% have exceeded earnings estimates. For the quarter, sales are expected to rise 4.8% and earnings 7.1%. Last week, results from Netflix and IBM highlighted the shift from the Old Economy to the New, and the lofty prices investors are willing to pay for the latter; Netflix currently trades at more than 100 times analysts’ earnings forecasts, whereas IBM trades at a mere 10.7 times earnings. The retail sector tells a similar story: Amazon’s price-earnings multiple of 110x dwarfs those of Kroger (11.6x) and Target (12.7x). To be sure, the variance in business models supports some of the differences; nevertheless, these are clear examples of the premiums investors are placing on companies with easily identifiable growth prospects. These companies also reflect a growing herd mentality, with investors gravitating towards stocks that have already performed well. From time to time, these trading patterns can drive up valuations for individual companies or entire industries; however, they can also reverse quickly as the herd changes direction. The crucial question is, “Can the company continue to meet such high expectations?” In contrast, value investments, which traditionally include Old Economy stocks, can provide substantial returns precisely because their already low expectations are easier to exceed.

This week marks the peak of second quarter earnings season with 183 companies in the S&P 500® Index reporting results. A continuation of the current trend of better-than-expected results, along with supportive economic data, should help sustain the market’s positive momentum over the near-term. Longer-term, investors will begin shifting focus towards global central banks’ monetary policies and potential tax reform legislation. The backdrop of an improving global economy, though, should enable the bull market to continue.

The FOMC meets this week; however it is not expected that the Committee will increase interest rates at this meeting. The FOMC next meets at the end of September. The latest economic information on the second-quarter GDP is released at the end of this week. According to the first report for the second quarter, the economy slowed compared to the first quarter — advancing at a rate of 1.4%. Reports for new and existing home sales for June are also available this week. Existing home sales climbed 1.1% in May, while new home sales advanced 2.9%.