Earnings season is here again and so far so good…

Markets rose last week with the launch of the second quarter earnings season. Technology stocks led the way with the popular “FAANG” group of companies regaining momentum. Energy stocks also rallied as oil prices continued to recover; West Texas Intermediate crude, the North American benchmark, has gained nearly 10% since hitting a low of $42.53 three weeks ago. Also, this week’s decline in crude oil inventories, which fell by the largest amount since September 2016, supported the price rebound. Financials, though, lagged despite better-than-expected earnings results (more on this below). A decline in interest rates and soft inflation readings overshadowed the sector’s favorable outlook; the consumer price index fell to 1.6% in June, down from 1.9% in May, for the slowest pace in nine months. The G20 meeting and ongoing Republican efforts around healthcare legislation dominated the week’s political headlines. Yet, in general, these events have had little impact on markets; investors have seemingly put aside any expectations with respect to legislative action until more concrete developments emerge. 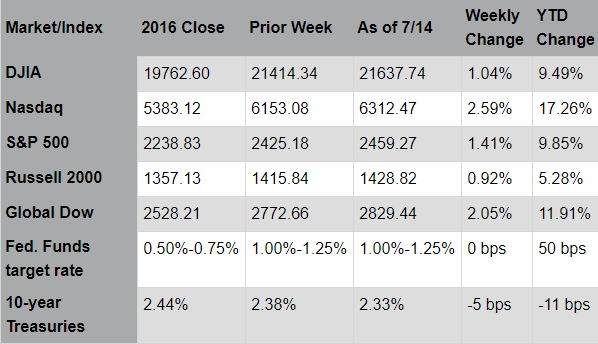 Thus far, 30 companies in the S&P 500® Index have reported results; 87% have met or exceeded analysts’ earnings expectations. Banks were in focus this week; JPMorgan Chase, Wells Fargo, and Citigroup all outpaced their earnings forecasts. Jamie Dimon, CEO of JPMorgan Chase, expressed his optimism for the U.S. economy. He stated that: “since the Great Recession, which is now eight years old, [the U.S. economy has] been growing at 1.5% to 2% in spite of … political gridlock because the American business sector is powerful and strong and is going to grow regardless.” He added that lending activity has been hampered by onerous regulations. Specifically, Mr. Dimon identified residential mortgages and small business loans as areas that could benefit from more flexible rules. Meanwhile, investment-related trading activity declined throughout the industry, in part, due to historically low market volatility. This week, 63 companies in the S&P 500® Index, including Netflix, American Express, General Electric, and Microsoft report earnings results; their updated business outlooks will likely drive the market’s near-term direction. We believe earnings announcements this week will still be ahead of projections and support the current market strength.

There isn't much available in terms of economic indicators this week. One report worth noting focuses on import and export prices in June. An indicator of inflation in products traded globally, the Import and Export Price Indexes impacts bond prices and equity markets, particularly when importing inflation rises, which often leads to bond and stock prices decreasing.