Financial companies are finally starting to perform, Energy is still volatile while Tech takes a breather…

Markets were mixed during the holiday-shortened week; the Financials sector outperformed as investors responded to rising bond yields. Energy stocks, though, remained volatile. Crude oil prices declined even as inventories in the U.S. fell to the lowest levels since January; continuing production increases in the U.S. and overseas are reportedly prompting OPEC to consider imposing production caps on previously-exempted Nigeria and Libya. Central banks were in focus as policymakers acknowledge improvements in the global economy; the European Central Bank and the Bank of England each indicated they may consider easing monetary stimulus. The shift corresponds with the release of minutes from the Federal Reserve’s June meeting which pointed to further interest rate hikes despite the recent softening in inflation. Economic data supported expectations for improving global economic growth. In the U.S., the ISM Manufacturing Index for June reached its highest level since August 2014; fifteen of the eighteen industries surveyed reported growth. The ISM non-manufacturing index similarly pointed to improving conditions, with sixteen of seventeen service industries reporting growth. Meanwhile, Europe’s economic recovery appears well underway. Industrial production increased for the fifth consecutive month in Germany, and also expanded in both France and Spain. 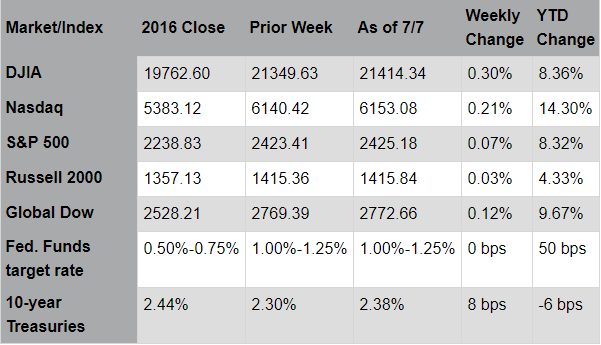 Looking ahead, the global central banks are more likely to raise interest rates or otherwise tighten monetary policy as economies improve. The most recent cycle of rising rates in the U.S. occurred from May 2004 to June 2006; many investors, with limited recollection of this period, may view a series of interest rate increases with uncertainty. Historically, rising rate cycles, which typically last between two to four years, correspond with improving economic conditions; they are often accompanied by bull markets. The current cycle began in December 2015 when the Fed Funds rate rose from 0.25% to 0.5%. We believe that, given its low starting point, the slow pace of rate hikes since then, and accelerating economic growth trends around the world, the cycle may continue for an extended duration; therefore, we remain optimistic regarding the longer-term outlook for stocks. The upcoming second quarter earnings period may provide a catalyst. Reports next week from JPMorgan Chase, Wells Fargo, Delta Air Lines, and PepsiCo will help determine the market’s near-term direction as companies provide updated outlooks for the final six months of the year.

Trading is expected to pick up following the holiday-shortened week. Last week's favorable employment report should quell investors' concerns about a slowdown in job growth. This week, reports focusing on consumer spending and inflationary trends are out with the Producer Price Index, retail sales report, and The Consumer Price Index.