Stocks rose this week following the Federal Reserve announcement on Wednesday to increase interest rates for a second time in three months.  Fed Chair Janet Yellen, in communicating the rate decision, noted: “We have confidence in the robustness of the economy and its resilience to shocks”; and, “Many more people feel optimistic about their prospects in the labor market.”  The favorable assessment buoyed investor sentiment, especially for shares of small and mid-sized companies which outpaced large cap stocks.  At the same time, Treasury yields declined as the Fed remained committed to a “gradual” pace of future rate hikes; the “dot plot,” which captures the Fed’s interest rate outlook, was largely unchanged from the December meeting.  Broadly positive economic data further bolstered investor confidence; robust housing starts, in particular, signal accelerating strength in the economy and bode well for the construction, transportation, and building materials industries.  Meanwhile, measures of consumer confidence are near post-recession highs; as a sign that consumers are responding to the improved economic outlook, retail sales rose for a sixth consecutive month.

Since the financial crisis, the Fed has been the primary driver of market action.  Yet, this week’s monetary policy meeting was notably uneventful.  Even as Fed officials raised rates for only the third time in a decade, the market’s response was remarkably subdued; indeed, this week, in sharp contrast to the market’s anxiety over the December 2015 rate hike, stocks rose and bonds fell.  Why the seeming disregard for the central bank?  Investors have apparently shifted focus from monetary policy to fiscal policy, that is, to Congress and the new administration’s pro-growth agenda.  These developments will likely dominate market action in 2017; healthcare, tax reform, regulations, infrastructure spending, trade, and immigration all present investment opportunities, as well as risks.  Certainly, with so many items on President Trump’s agenda, the main question is the extent to which the administration will be able to deliver on its many promises.  Nevertheless, the return to a market environment in which momentum will be determined mainly by developments in the real economy, rather than monetary policy, is yet another milestone in the economy’s long road to recovery since the Great Recession.

Over the last few weeks, growth-oriented stocks in areas such as transportation, industrials and energy, have sold off.  The recent action is most likely a pause after the significant post-election rally.  The Fed’s decision to increase interest rates, and the market’s reaction to that decision, provides confirmation of the economy’s strength.  Despite short-term negative movements in the markets, this positive outlook should provide a boost to these sectors over time irrespective of other benefits which may result from legislative action. 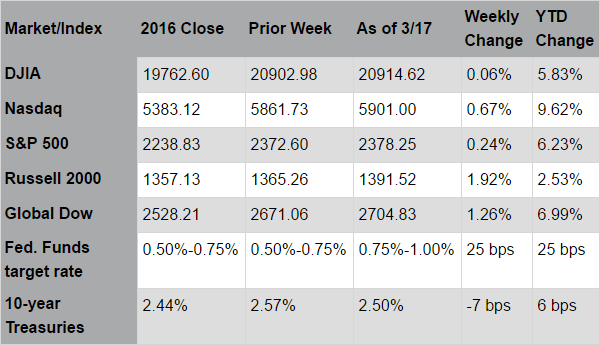 This week should see equities markets settle following the Fed's decision last week to increase interest rates for the first time this year. February's figures on sales of existing and new homes are available this week. Orders for durable goods have been volatile at best. Not much change is expected in the manufacturing sector when February's numbers are released at the close of this week.