Markets are pausing to check in with the Fed this week….90+% chance of an interest rate increase

Declining oil prices weighed on the markets this week; West Texas Intermediate crude, the North American benchmark, fell 9% to drop below $50 per barrel for the first time this year.  Record U.S. inventory levels, partly due to scheduled refinery maintenance, but also a result of increased production, contributed to the pullback.  At an industry conference this week in Houston, Saudi officials, who would prefer an oil price increase to $60 per barrel or higher, told several U.S. producers not to assume that OPEC would automatically extend its production freeze agreement in May.  The comments highlight increased anxiety among global oil producers which must contend with a revitalized U.S. energy sector.  Indeed, the shale industry’s competitive positioning strengthened during the OPEC-induced bear market from 2014-2016; shale oil companies reduced break-even costs while industry consolidation benefitted the strongest and most technologically advanced producers.  President Trump’s promise to reduce energy-related regulations has further encouraged oil company executives to pursue aggressive growth strategies.  As a result, oil prices in the near-to-medium term are likely to remain within a range of $40 and $60 per barrel, a level which should support robust U.S. energy services activity; stocks, though, may remain somewhat volatile as investors respond to periodic production and inventory data.

The February jobs report confirmed the health of the U.S. economy and all but assured a Federal Reserve rate hike next week.  Total non-farm payrolls grew by 235,000, while the unemployment rate declined 0.1% to 4.7%.  The “U-6” unemployment rate, which includes discouraged or part-time workers who would prefer a full-time position, fell to 9.2%; the metric, favored by Fed Chair Janet Yellen, is near pre-recession levels and down from a peak of 17.1% during the financial crisis.  Meanwhile, labor force participation (the percentage of the population that is working or actively seeking work) rose 0.1% to 63.0%, as 340,000 eligible employees entered the workforce, the biggest improvement since July 2016.  The increase suggests those seeking employment are feeling more hopeful about their job prospects; the reading also points to rising business confidence and expanded hiring plans.  Wage growth remains somewhat muted despite the strengthening labor market; average hourly earnings rose 0.2% compared to January, and 2.8% year-over-year.  Still, continued job creation will eventually lead to stronger wage gains which will, in turn, support consumer spending, the main driver of economic growth.  Thus, the recent pause in stock prices is unlikely to presage a larger correction; positive economic data should support improving corporate performance and sustain the market’s positive bias. 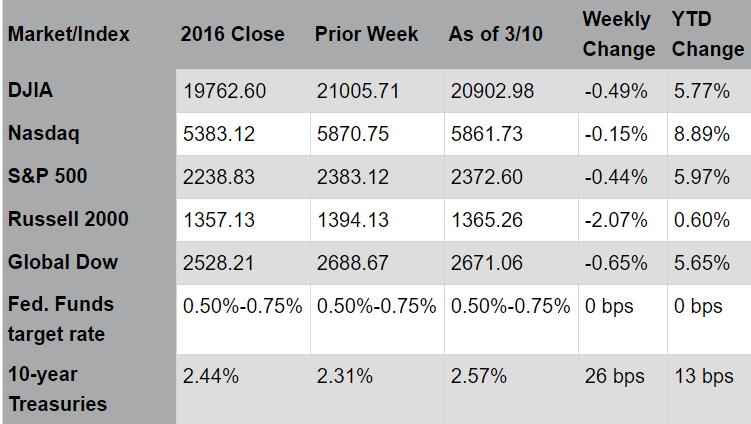 This week provides several important reports, including information on consumer prices, producer prices, and retail sales — each of which offers guidance on inflationary trends. The latest report on industrial production is also available at the end of the week. However, investors will be watching the results of this week's FOMC meeting, as indications are that the Committee will increase the federal funds target rate for the first time in 2017.