Is the Market overbought???? We do not think so at this point…

Markets were mixed last week; gains for the Dow Jones Industrial Average and S&P 500® Index continued while the technology-heavy NASDAQ and Russell 2000® Index of small company stocks lagged.  As investors gravitated towards conservative areas of the market, electric utilities were the strongest performers followed by consumer staples companies, such as food and beverages.  The euphoria that is normally at major market tops is largely absent despite the fact that major market indices are hitting all-time highs.  At 8% above its 200 day moving average, the S&P is by no means overbought. The 12-14% range is generally a more statistically significant overbought signal. Heightened investor anxieties led to a decline in Treasury yields and an increase in the CBOE Volatility Index (or, the “fear gauge”).  Market momentum stalled followed comments by Treasury Secretary Steven Mnuchin on Thursday that he hoped to have a comprehensive tax reform package approved before Congress’ August recess; the timeline disappointed investors expecting a Presidential announcement as early as next week.  Economic data, meanwhile, remained upbeat; strong home sales activity is increasing homeowners’ equity and, in turn, boosting consumer confidence.  At the same time, younger people are increasingly interested in transitioning from apartments to single-family homes.  Millennials, which last year surpassed Baby Boomers as the largest living generation in America, will likely have a major impact on economic trends for decades to come.

During President Trump’s first 30 days in office, the Dow gained 4.02%, the best mark since the start of Franklin D. Roosevelt fourth term in 1945.  More recently, though, cautious skepticism due, in part, to high valuations for the major stock indices, is increasingly challenging investor optimism.  We note that, while overall index levels may be somewhat elevated, certain industries and individual companies are still attractively valued.  For example, the recovery in the energy sector remains in its early stages; with OPEC adhering to its production freeze agreement and global oil demand continuing to rise, energy is poised to be a significant growth area over the next several years.  Moreover, the benefits of reduced corporate taxes and a lighter regulatory regime are difficult to overstate; together, they could accelerate U.S. GDP growth beyond the modest 2% average since 2010.  An improvement to a 3% or higher growth rate, a noteworthy development, would justify further market gains.  Certainly, risks remain, and investors are appropriately discounting the possibility that some of these initiatives will falter.  Nevertheless, the current climate of business optimism and improving economic conditions should help stocks hold onto their recent gains as these critical questions are addressed. 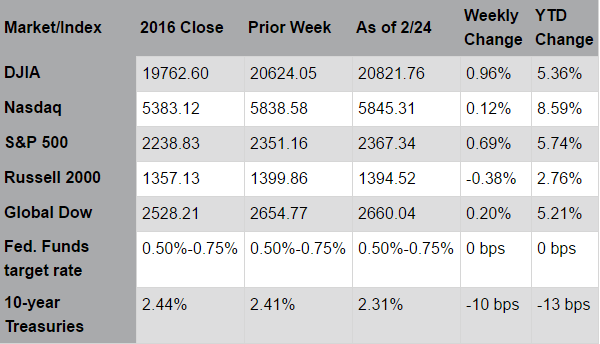 Investors will be focused on the revised numbers for the Q4 GDP, as well as the latest consumer income and spending figures from January.