Global Economy is slowing but the U.S is still the Belle of the Ball

The tug-of-war between the bulls and bears continued with mixed economic data and the absence of significant market catalysts.   On Friday, all of the major indices sold off on global growth concerns and ongoing trade tensions.  For the week, the Russell 2000® Index fell 2.67%, followed by the Dow Jones Industrial Average (-1.34%), the S&P 500® Index (-0.77%), and the Nasdaq (-0.60%).  The Federal Reserve provided news headlines on Wednesday: the Fed lowered its 2019 U.S. economic growth outlook from December’s 2.3% estimate to 2.1%; more importantly, the Fed announced a revised projection of no interest rate increases this year, and a sooner-than-anticipated end to its balance sheet runoff program.  The markets’ initial, positive reaction did not last.  Friday’s delayed release of the February existing home sales report showed an 11.8% increase, the largest month-over-month increase since December 2015.  However, the euro zone’s “flash” Purchasing Managers Index (PMI) fell to its lowest level since April 2013; and the U.S. flash PMI fell to a 21-month low.  European Central Bank President Draghi stated that the risk of a recession in Europe is still quite low; the Fed commented on indications of slower consumer and business spending.  Separately, the spread between short and long-term U.S. Treasuries turned negative on Friday for the first time since 2007; the yield on the 10-year U.S. Treasury Note fell below the 3-month T-bill.  The decline in long-term rates directly impacts the profits of lending activity and earnings growth; some consider this “inverted yield curve” an indicator of recession. However, we feel we are a long way away from recession at this time.

U.S. negotiators will travel to China next week to resume face-to-face negotiations the following week.  The rhetoric suggests progress with major hurdles remaining; apparently, both sides desire an agreement but the game of “wait and see” continues.  Meanwhile, Europe faces the uncertainty of Brexit.  On Thursday, the EU granted an extension to May 22 if the United Kingdom Parliament approves the Brexit agreement; if not, the EU will only extend the Brexit deadline to April 12.  The UK, and the Parliament, appear deeply divided; next week’s vote may reveal the future of Brexit.

The IPO market in the U.S. is heating up:  Levi Strauss went public this week; Technology companies Lyft and Uber are planning IPOs over the next few weeks.  These long-awaited IPOs are welcome additions to the equity markets; over the past few years, the number of listed companies has declined due to mergers, private equity transactions and stock buybacks.

Economic data are often widely debated; bulls and bears sometimes interpret the same data to support economic growth or recession. The first quarter GDP will no doubt reflect a slowdown in economic activity.  Companies are now in the “quiet period” before earnings season starts in mid-April.  The recent pattern of lower-than-normal trading volumes continued even during Friday’s selloff; the notable exceptions were stocks in the Financials sector.  Looking ahead, the tug-of-war may lead to heightened volatility in the absence of a market catalyst. 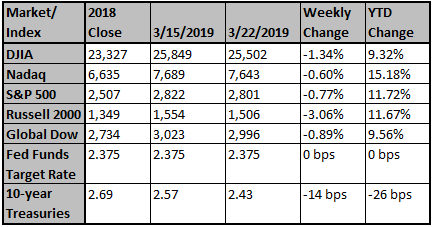 1. The Federal Reserve has made the following decisions to implement the monetary policy stance announced by the Federal Open Market Committee in its statement on March 20, 2019: The Board of Governors of the Federal Reserve System voted unanimously to maintain the interst rate paid on required ...

A trade agreement could come in weeks, but it won't erase...

The United States and China could finalize a trade agreement in a matter of weeks, said Kurt Campbell, chairman and chief executive of advisory firm The Asia Group.

Everything to Expect From Apple's Big Video and News Even ...

Americans are feeling better about the economy than they ...

If President Trump stays in office after the 2020 election, he may have a strong U.S economy to thank.