The Fed will stop raising rates. Now what?

On Wednesday, the Federal Reserve Committee announced (as we have been expecting) that they would not raise rates again in 2019.  Powell indicated that the Fed's pausing is because of a more significant slowdown in growth than anticipated.  Much of this "slow down" is being measured through "Industrial Production."  We think the magnitude of the slow down may be a little overstated.  Below is a chart of U.S Industrial production over the last five years.  As you can see, the current drop in production is on par with the drop 2018, 2017, and 2016.  It is far smaller than the total drop that happened between late 2014 and mid 2016.  Because production indices are inherently volatile, and because they can be affected by various forces, we don't think it's advisable to put too much emphasis on this one indicator alone. 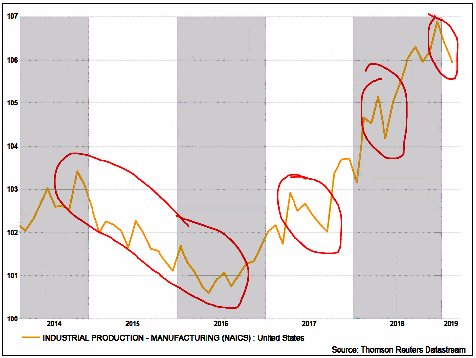 Further, we believe the trade dispute between the U.S. and China has been a contributing factor to the current production slow down, and we take confidence that it appears we may be nearing an agreement.  China has already agreed to a number of concessions, even if there have not been enough concessions made for Trump to call the dispute settled.  Rather than becoming overly focused on the news of the day, we believe it's more useful to focus on the overall trend.  Slow and steady progress has been made.

We also think the rapid jump in interest rates and the cold weather in the Northern U.S. contributed to the slowdown in manufacturing.  During the fourth quarter of 2018, we saw a significant increase in the 10-year Treasury rate (as well as the rate on 30 year fixed rate mortgages).  The ten year Treasury rate increased 5.5% between September 30, 2018 and November 7, 2018, and it was up more than 15% from where it was on August 24, 2018.  While short lived, the rapid increase in rates and the cold winter weather likely contributed to a fall in home purchases and new projects.  Because new homes and moving typically involve home upgrades, new furniture, etc., it would be reasonable to associate some of the slowdown in manufacturing with the slowdown in the housing market.  February data showed a surge in U.S. home sales, bringing them back to the highest level since March, 2018, which give us reason to believe we may see an uptick in manufacturing in the coming months.

Another data point that gives us confidence is that Labor Productivity continues to improve.  Over the last few years, a number of market bears have pointed to the relatively low levels of labor productivity as a signal that we were heading for a slowdown.  The most recent reading of U.S. Labor Productivity puts it at its highest level since late 2010.  More importantly, it is following an upward trend.

Personal Income (in RED) is also continuing to improve.  In the chart below, we ran an overlay of the S&P 500 Total Return Index (in Blue) with Personal Income.  The U.S. economy is a consumption driven economy, so while personal income remains strong, inflation remains low, and consumer confidence remains high, it is difficult for us to make an argument that we are facing a recession.  You can see the large drop in personal income and the correlating large drop in the stock market. 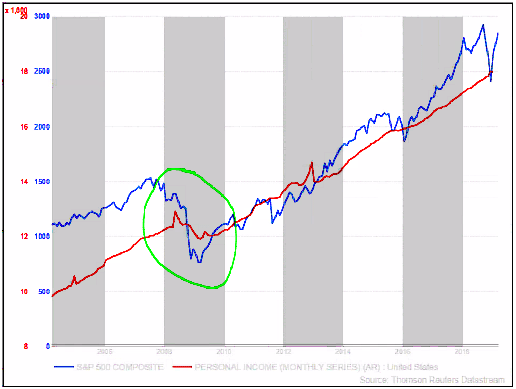 Much of the drop in the long-end of the yield curve can be attributed to the Federal Reserve announcing it will stop raising rates.  The short-end of the yield curve is being propped up by the current Target Fed Funds Rate (2.5%).  Growth in the economy, over time, can lift the long-term rates higher, and may very well help us avoid an inversion between the 2-year and the 10-year yield.

We recommend being patient with respect to the yield curve, and allowing the Spring's data to flow in.  Virtually all economic indicators we follow point to growth, and the equity and fixed income markets, based on various measures, would be considered to be at fair market value by many.  The drop in mortgage rates will also help promote growth, and this growth (after the immediate response to the Fed's announcement) may well help push the long end of the yield curve up.