Hurricanes Harvey and Irma weighed on the economy; but economic activity should rebound as rebuilding efforts begin.

Markets rose last week as Hurricane Irma caused less damage than feared and tax reform efforts took center stage. Prices for both U.S. Treasuries and gold fell following steady increases since early July; an apparent easing of geopolitical tensions with North Korea (notwithstanding Friday’s early morning launch of a missile over Japan) relaxed demand for these “safe haven” assets. The price of West Texas Intermediate crude, the North American benchmark, briefly surpassed $50 per barrel for the first time in six weeks. The Paris-based International Energy Agency reported a higher-than-expected (2.3 million barrels per day) growth in global oil demand in the second quarter. Energy stocks also rallied in anticipation of higher project activity; the PHLX Oil Service Sector index gained 6% for the week. Economic data, meanwhile, were mixed: industrial production declined 0.9% in August; retail sales declined 0.2% in September; and, the preliminary reading on consumer sentiment dropped from 96.8 last month to 95.3. Hurricanes Harvey and Irma weighed on the economy; but activity should rebound as rebuilding efforts begin. There is a lot of work to do from the storms that should provide a longer term lift to the economies that were most devastated by the storms. 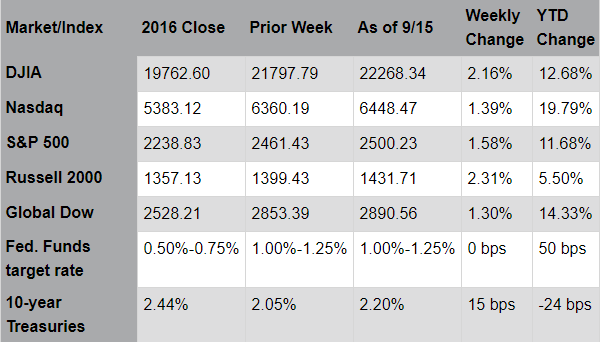 The Dow Jones Industrial Average, with a gain of 470 points, posted its best week of the year. And, overall, major market indices continue to reach new highs despite concerns over the duration of the bull market and elevated stock valuations. The impressive resilience is a function of a favorable economy and an absence of disruptive geopolitical events. Recall in years past when events threatened to undermine the global economy; this year, the market views even the latest conflict with North Korea as a sideshow. Moreover, investor skepticism of the market’s advance is helping to avoid the type of enthusiasm that typically signals the end of a bull market. So far this year, the main cause for concern revolves around President Trump and his ability to deliver on his ambitious pro-growth agenda. This week’s focus on tax reform, as well as last week’s debt ceiling deal with Democratic leadership, suggest that the administration recognizes the need for a legislative “win.” For now, global economic growth and low interest rates continue to support market conditions. Third quarter earnings season, which begins in October, and the three remaining Federal Reserve meetings should plot the course for markets through the remainder of the year.

The Federal Open Market Committee meets this week following a break in August. Committee members will cull a mixed bag of economic information, with job growth steady but little inflationary pressure. The FOMC may opt to leave interest rates as they are for the time being, with a possible increase in October in anticipation of more noticeable economic growth during the fall months.