Markets were mixed last week; small cap stocks gained while large cap stocks were essentially unchanged. Sectors which respond to economic growth, such as Energy, Industrials, and Financials, outperformed; conservative areas of the market, including many consumer stocks and Utilities, lagged. The performance variance reflects a “risk on” sentiment as investors view positively the prospects for tax reform and improving global economic conditions. Congressional leaders have promised to release the outlines for tax legislation this week; many expect that the plan would lower the top corporate rate from 35% to 20%. Meanwhile, the Organization for Economic Co-Operation and Development (OECD) provided its Interim Economic Outlook. The report highlighted ongoing improvements throughout the world, with all major economies contributing to growth. The Outlook reiterated its earlier forecast for 3.5% Global GDP growth in 2017, and increased by 0.1%, to 3.7%, its projection for 2018; the report reiterated that consumer spending and business investment will support U.S. GDP growth of 2.1% in 2017 and 2.4% in 2018. Also, euro zone manufacturing and services activity accelerated in September; rising employment and increased business confidence support a favorable regional outlook. Meanwhile, markets continue to largely ignore the standoff with North Korea amid a fresh round of sanctions and escalating rhetoric. 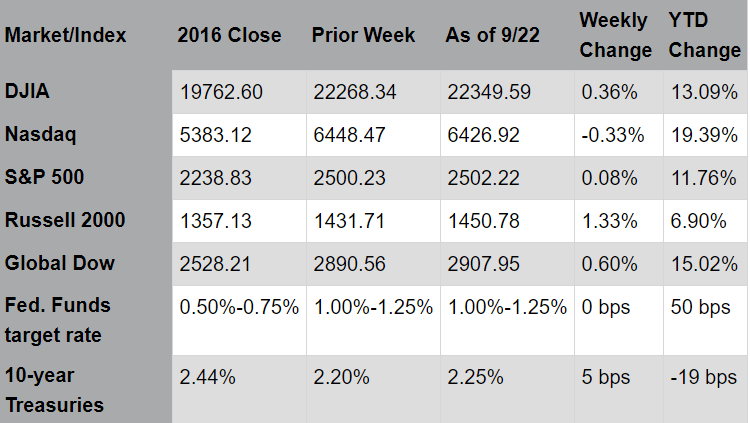 Last week, the Federal Reserve announced its plan to initiate “balance sheet normalization” in October. The process would gradually unwind the Fed’s extraordinary accumulation of Treasury and mortgage-backed securities; the Fed will no longer reinvest proceeds as a portion of these holdings mature. Leading up to the event, some analysts were concerned about a repeat of the “Taper Tantrum” in 2013 which triggered a brief selloff in stocks. This time, though, markets remained stable; investors widely anticipated the announcement and, perhaps, viewed the decision as confirmation that the economy was sufficiently healthy to withstand the withdrawal of monetary stimulus. Fed officials also provided an updated interest rate forecast; the median projection shows one additional rate hike in 2017 (likely in December), three in 2018, and two in 2019 (down from three as of the June meeting). The slightly reduced rate outlook stems primarily from continued low rates of inflation. Recent signs of tightening labor markets, though, suggest that inflation may be on the rise. Moreover, strengthening business confidence could deliver wage growth that ultimately drives prices higher. The Fed also noted that recent hurricane activity will impact third quarter economic data, but “past experience suggests that the storms are unlikely to materially alter the course of the national economy over the medium term.”

Investors often view September as a historically negative month for stocks. They recall somewhat recent events such as the 9/11 attacks in 2001 when the S&P 500® declined 8%, the financial crisis in 2008 when the Index fell 9%, and the European debt crisis in 2011 when the Index lost 7%. In reality, though, the month is statistically insignificant; September returns have averaged -0.4% over the past thirty years, including fourteen years with positive returns. Growing optimism regarding economic growth will likely add to the “win” column this year; market strength, especially in small cap stocks, is an encouraging sign as we approach third quarter earnings season.

September and the third quarter come to an end this week. The final figures for the second-quarter gross domestic product are released this week, as is the August report on consumer income and spending.