Market continues to expect positive economic surprise in the months ahead

The perceived disconnect between the strength in equity markets vs. the current standing of the economy remains – without hesitation – the primary source of anxiety among investors. We continue to think about this a little bit differently than the consensus… specifically, the quiet leadership from the more cyclical corners of the market may be more suggestive of a positive economic surprise in the months ahead. Consumer Discretionary vs. Consumer Staples (equally weighted), is on the cusp of fresh relative highs domestically and has already broken out globally – this is as helpful of a read on the market’s perception of the economy’s forward trajectory as anything we look at. The Industrials sector continues to outperform as well, particularly the Transportation, Machinery, and Building Product categories. The Macau Gaming stocks are at fresh recovery highs, Copper remains firm, Aussie $ has strengthened, etc. On the other side of the ledger, Utilities (defensive) haven’t offered any relative advantage even with bond yields seemingly stuck where they are. We’re still betting the market is going to get this call right…

The S&P 500 Index returned 77 basis points last week delivering the fourth straight week of gains. The index pushed past its February 19th closing high twice this week for a new all-time closing high on Tuesday and higher again on Friday, closing at 3,397.16. The index is currently up 6.47% year-to-date. Wednesday marked the only negative trading day, as equities posted positive returns the other four days of the week with growth and larger stocks being favored overall. U.S. initial jobless claims of 1.11 million were higher than the consensus estimate of 920K and the previous week’s claims of 963K, but still much lower than the March 27 high as claims have trended down since the peak. Crude oil closed at $42.34 per barrel on Friday, increasing 0.79% for the week. Consumer discretionary stocks also had great performance as Target Corp and L Brands Inc. posted the top spots in the index last week with 13.08% and 12.92% returns respectively. Both retailers reported better than expected second quarter results on Wednesday. Kohl’s Corp was the worst performing stock in the S&P 500 Index, returning -19.23%. Last Tuesday, the company reported a smaller loss than expected for the second quarter, but sales declined 23% from the year prior. Earnings announcements expected this week include salesforce.com Inc., Intuit Inc., Autodesk Inc., Dollar General Corp, Best Buy Company Inc., Hormel Foods Corp, HP Inc., Dollar Tree Inc., Ulta Beauty Inc., and many others

With Congress at an impasse over further potential stimulus, monetary policy was in focus last week with the release of the July 28-29 Federal Open Market Committee meeting minutes. The minutes overserved that based on market pricing the federal fund's rates are expected to not exceed the current target range until 2024. The Federal Reserve discussed the employment increase for both May and June noting that it was only enough to offset one-third of the jobs lost in March and April. Beginning in May real disposable personal income has fallen back from reduced fiscal stimulus, but higher unemployment benefits are supporting personal incomes through July. The meeting notes discussed the strong rebound in the housing market, which was corroborated by both last Tuesday’s housing starts data, and last Friday’s existing home sales report. Housing starts popped 22.6% in July and existing home sales witnessed a leap of 24.7% in July. The 5.86 million-unit existing home sales annual rate was up 8.7% versus the year before and represented the highest rate since December of 2006.
Source: First Trust, Strategas 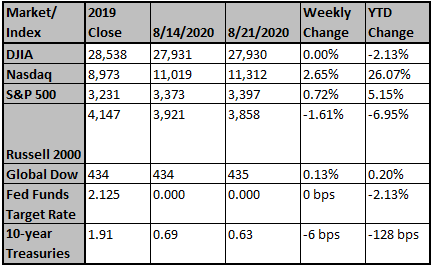 Chart reflects price changes, not total return. Because it does not include dividends or splits, it should not be used to benchmark the performance of specific investments

Investors fleeing the stock market just prior to President Obama's White House tenure missed a 26% return in 2009, and a 22% gain in 2017 for those sellers upon Trump's ascent, according ...

New Thinking on Lockdowns: They're Overly Blunt and Costly

Blanket business shutdowns-which the U.S. never tried before this pandemic-led to a deep recession. Economists and health experts say there may be a better way.