Market pulls back for the first time in four weeks

Last week, equities fell for the first time in four weeks. Early last week, cyclicals continued to run from the week before. On Thursday however, risks of a second wave of COVID-19 cases sent the S&P 500 down over 6.8% as investors shed risky cyclical names for relative safety in Information Technology and Communication Services. Friday cyclicals made a slight comeback, but still ended the week negative as Energy, Financials and Industrials were the worst three sectors in the S&P 500.

Value was the poorest performing factor last week and momentum was the top followed closely by low volatility. Overall, factors remain highly volatile as stock markets continue to iron out the full effect of the COVID-19 recession.

Starbucks issued preliminary earnings guidance with 3Q well below consensus estimates and guided 4Q ahead of estimates. They also announced a plan to close 400 stores over the next 18 months which led to a -7% return last week. Grubhub and Netherland based Just Eat Takeaway announced the two companies will be merging in an all-stock transaction. Grubhub had been in talks to combine with Uber but GRUB’s CEO said the JET offer was ‘much higher’ than the Uber proposal.

Looking ahead to this week, expect equity markets to trade along with the anticipated speed of reopening the U.S. economy. There will likely be some market moving economic news in retail sales, jobless claims, housing starts and building permits as equity markets continue to try and price in just how fast an economic recovery can take place.

Checking in on the Bond Markets we saw that longer-term Treasury yields fell last week following the Fed’s June meeting and on concerns that an upward trend in new coronavirus cases in certain states will prolong restrictions on economic activity. The Fed held rates steady at its policy meeting last week, as expected, and signaled no rate increases through 2022. At his virtual press conference following the meeting, Fed Chairman Jerome Powell said, “We’re not thinking about raising rates. We’re not even thinking about thinking about raising rates.”

Initial jobless claims for the week ending June 6 came in better than expected, which marked the 10th straight week of declines compared to the prior week. Although the number of Americans receiving unemployment benefits are still near historic highs, they are lower than the previous week. Consumer sentiment improved in the two weeks ending June 10 as the University of Michigan’s Consumer Sentiment Index increased more than expected. The boost in sentiment was mostly due to recent job gains.
Source: First Trust 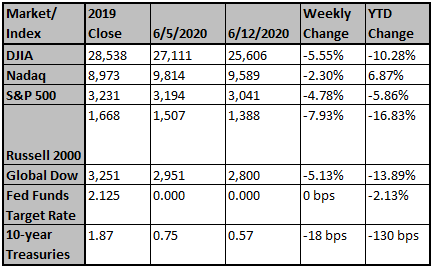 Walmart tests self-checkout only location with no cashiers

A Walmart in Fayetteville, Arkansas is testing whether the increased use of self-checkout will speed up customer purchases while providing a safer experience for shoppers through less int...

Kaplan had previously predicted that unemployment could soar as high as 20 percent.

United Airlines on Monday said it's using its frequent flyer program to back a new $5 billion loan, as the carrier seeks to shore up liquidity as coronavirus weighs on demand.