Most of the equity markets edged higher this week despite the uncertainties in the Middle East; the Russell 2000® Index declined fractionally. For the week, the Nasdaq (1.75%) led the major indices followed by the S&P 500® Index (0.94%), the Dow Jones Industrial Average (0.66%) and the Russell 2000® (-0.19%). The markets opened the week lower following last week’s assassination of Iran’s military leader General Soleimani by U.S. drones in Iraq. Iran then retaliated with a nighttime, no casualty bombing of two U.S. bases in Iraq. Both sides then stepped back from the threat of further conflict with “no plans to retaliate” statements; on Friday, though, President Trump announced new economic sanctions on Iran. The short-term calm enabled the equity markets to reverse course and move higher.

Following several days of meetings scheduled for next week in Washington, the U.S. and China are due to sign the Phase One trade agreement; the White House indicated that details of the deal will be released on the 15th. Phase Two negotiations, which will depend on the success of Phase One, may not be finalized until after the November election. The United Kingdom’s House of Commons approved the Brexit Withdrawal Agreement which heads to the House of Lords next week; the bill covers terms including customs and payments to the European Union. The UK is due to leave the EU on January 31 followed by an 11-month transition period.

Friday’s release of the December jobs report included a somewhat disappointing 145,000 new jobs, slightly below estimates for 160,000 and well below November’s downwardly revised 256,000. For the first time, the number of women in the workforce exceeded men by 109,000; unemployment remained at 3.5%, a 50-year low. Positive Job growth over the past 10 years continues to provide optimism for economic growth in 2020.

Many investors are starting the New Year by repositioning portfolios to realize gains or losses deferred from 2019. Next week marks the beginning of fourth quarter earnings season; company results will likely determine market momentum over the next few weeks. Volatility remains low even with the geopolitical events of the past week. For now, the markets may continue to move higher on expectations for modest economic growth along with the de-escalation of trade disputes between the U.S. and China. 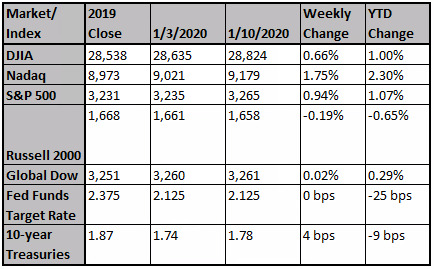 Beginning today, David Calhoun steps into the cockpit as CEO of Boeing, the company's fourth chief executive in just under five years. Calhoun is

Apple Is Moving Past the iPhone. Here's Why That's Inevit...

Get ready for the next wave of growth at Apple.

Most of the U.S. economy sailed through two turbulent years of a trade war with China with barely a scratch, a review of key economic indicators shows.