The good news is that midterm election year volatility has usually turned into an opportunity for investors, with the S&P 500 positive in the 12 months following a midterm election every time since 1942.

October has historically been the month that marked this turning point and stocks, on average, are up 31 percent from the midterm election low. Our best case for why this happens is that presidents usually suffer large midterm election losses, and the equity market begins to anticipate better monetary and fiscal policy in the year following a midterm election. The big question is whether this time is different. Investors argued in September 2010, 2014, and 2018 that “other factors” would prevent this from being the case, and, in each case, stocks were higher one year later. But these events happened with low inflation. Monetary and fiscal policy is far more constrained to help the economy today with inflation elevated. The two major instances when stocks did not rally into the midterms are 1974 and 1978, both periods of increasing inflation. Still, stocks were higher one year later from their midterm election dates.

The news last week from FedEx about slowing economic activity and removal of guidance gives us more comfort with the idea that 2023 EPS estimates are yet to be revised lower. The initial move lower during the second quarter reporting season will likely continue as we approach third quarter reporting season, and it now appears to be a question of how much. Currently, the street estimates are $243 but were $252 just three months ago. We are fully aware of the money illusion from elevated inflation that could dampen the decline. 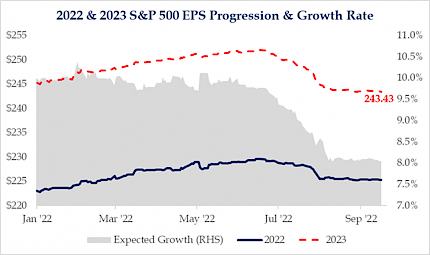 The aggregate strategist data shows the average year-end target for the S&P 500 standing at 4,346, which is down marginally from August. This implies a roughly double digit return from current levels and shows that strategists remain optimistic about the last four months of the year even with elevated levels of macro uncertainty. With that said, it continues to be expected that the 2022 full-year return will be negative. 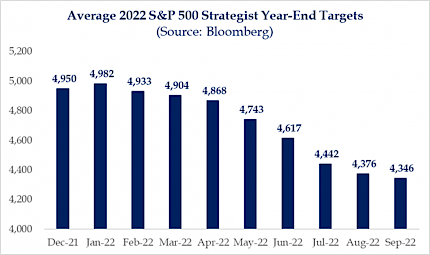 The data also continues to show that top-down earnings estimates are being revised lower. The average September estimate is $224, which is down from its December peak of $231 and now below Strategas’s estimate of $228. Furthermore, $224 is below the 2022 bottom-up estimate which continues to move sideways at $225. 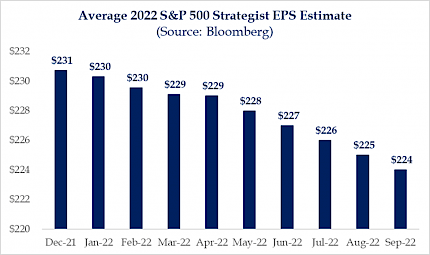 The average estimate for 2023 EPS from Strategists is $229 with the median falling at $232. Both of these figures are below our estimate of $234 for the year. What’s becoming more evident is that growth expectations overall continue to fall for 2023 but they still do not reflect levels that would be associated with a recession. The long term CAGR for S&P 500 EPS is between 6.0-6.5% which we are now falling below. 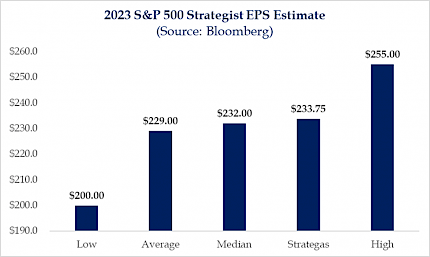 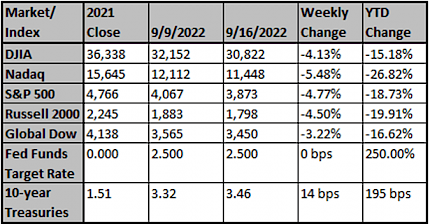 Consumer sentiment ticked up in early September from historically low levels as Americans felt slightly better about the economy while expressing uncertainty about the future.

Tax brackets, 401(k) contribution limits, and estate and gift tax thresholds are expected to get the biggest inflation adjustments in decades.

The Fed: Fed to put a 'firm foot on the brake pedal' this...

The Federal Reserve will put a 'firm foot on the brake pedal' of the economy this week in the continuing effort slow demand and therefore cool inflation.