We had been bullish on stocks all the way back to March 2009, when mark-to market accounting was fixed and the Financial Panic started to recede. At that time the S&P 500 traded as low as 666. What a time to buy!

After that we remained bullish. We didn’t recommend selling in spite of a wide range of fears that spooked many others, including the Great Recession lasting through 2010, a double-dip recession, a second wave of home foreclosures, an implosion in commercial real estate, the passage of Obamacare, a Greek debt default, a potential breakup of the Eurozone, the Fiscal Cliff, Brexit, or the election of President Trump. While others bailed out way too early on the bull, we kept riding.

We rode it so long that some called us “perma-bulls.” But as we looked at low interest rates and healthy profits, we didn’t see any other choice.

In January of this year we rebalanced clients’ portfolios and let everyone know we thought this year was going to be very difficult. Then in June, we rebalanced our client portfolios we announced we were bullish no more. In particular, we said “we don’t expect the S&P 500 to hit a new all-time high, above the old high of 4,797, anytime soon.” Instead, until one of our two scenarios plays out – a recession or the realization the Fed has pulled off a soft-landing – US equities are likely to be in a trading range with potential bear market rallies that come and go.”

We still expect the much more likely scenario is that a recession will arrive (if not already here) sometime in 2023 and that stocks will remain in a bear market until the recession hits. Why a recession? Because the Federal Reserve will have to get tight enough to reduce inflation toward its target and a monetary policy that’s tight enough to control inflation is going to send the economy into a recession.

Back in June we said that stocks could easily rally from then-current levels, when the S&P 500 was at 3675, but that such a rally wouldn’t last. After that the S&P rallied up to a closing high of 4305 in mid-August before dropping to 3693 at Friday’s close. Don’t be surprised by other bear-market rallies, which will also fade.

As always, one of the things we watch is First Trust’s and Brian Wesbury’s Capitalized Profits Model to assess fair value for the stock market. The model starts with the government’s measure of economy-wide corporate profits and uses the yield on the 10-year Treasury Note to discount those profits.

The yield on the 10-year Treasury Note finished last week right around 3.70%, which, when plugged into our model, suggests fair value for the S&P 500 is about 3600. That would be a 2.5% decline versus the Friday close.

But long-term yields may go higher from here. With a 4.00% yield on the 10-year Treasury, the model says fair value on the S&P is about 3325, which would be a 10% drop versus Friday’s close. And even if long-term yields don’t go higher from here, approaching and entering a recession is highly likely to eventually cut corporate profits. Either way, there are reasons to expect we haven’t seen the bottom yet for stocks.

A couple of things to keep in mind. If you’re a very long-term investor who doesn’t want to time the market, none of this discussion matters much. Just maintain your normal allocation to stocks and don’t be shy about continuing to buy stocks at your normal intervals. That way you’ll be buying at low stock prices, too, and stocks should be worth substantially more when you’re spending down assets in the far away future. 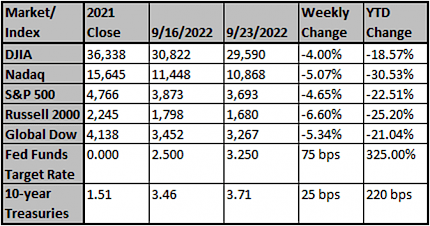 Investing.com -- U.S. stocks opened higher after a sell-off on Monday that sent the Dow into bear market territory as investors worry about the risk of recession

Figures will gauge home sales in the U.S. amid rising mortgage rates, along with household spending and income.