NAFTA negotiators remain upbeat about the prospects of a deal. This will be an "agreement in principle" rather than a full deal which means that while it won't be signed, it can still trigger the formal Congressional review so that Mexico's current President is able to sign it before his term ends and he leaves office. However, on Friday, negotiations between the U.S. and Canada appear stalled in meeting the White House’s imposed deadline. Even so, President Trump plans to notify Congress of the US/Mexico deal which he hopes will replace NAFTA. Canada’s heavy reliance on NAFTA export trade will pressure the country as negotiations continue into next week. Also, President Trump appears ready to implement the previously discussed $200 billion in tariffs on Chinese imports next week. Elsewhere, the European Union and the U.S. have not reached an agreement.

We continue to caution investors NOT extrapolate NAFTA progress with a deal with China. China negotiations are a different animal and we wouldn't anticipate much happening here until after the midterm elections.

Stocks continued to move higher last week in the run-up to Labor Day weekend.  The Nasdaq (+2.06%) led, followed by the S&P 500® Index (0.93%), the Russell 2000® Index (0.87%), and Dow Jones Industrial Average (0.68%).  Also, with comparatively low trading volumes, all of the major indices moved higher in August: the Russell 2000® and Nasdaq led with gains of 4.03% and 3.81%, respectively. Major factors included solid earnings, economic reports, and commentary by Federal Reserve Chairman Powell which reinforced the expectation of gradual interest rate increases.

Looking ahead, investor attention will turn to third quarter earnings reports and corporate outlooks for 2019.  Trade issues, including NAFTA negotiations, and discussions with both Europe and China, will continue to influence market volatility.  Also, investors will closely monitor the upcoming mid-term elections, and the potential shift in party control of Congress. These events have the potential to create market volatility; but worldwide economic growth remains the primary driver. Valuations continue to rise, but not excessively so; overall, the positive bias heading into the Fall reflects the combined influences of moderate inflation, interest rates and market sentiment. 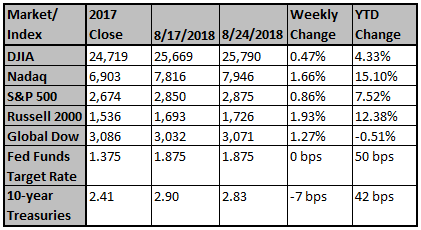 Will Chinese investment rescue a city in Germany's Rust B...

Duisburg was once a steel boomtown. Now it's counting on China's Belt and Road initiative to return the city to prosperity.

Why Kohl's And Other Successful Retailers Have Gone Back ...

Oliver Chen, Managing Director and Senior Equity Analyst covering retail and luxury goods at Cowen Inc. shares his perspective on where he sees the retail industry heading and key things ...