New era for trade with Mexico and Canada, finally a fair deal for all

Just reaching an agreement was the first step. Now the US Trade Promotion Authority (TPA) process will kick in. By the end of 2018, we expect the International Trade Commission to issue a report for Congress detailing the economic impact of the renegotiated NAFTA agreement. The purpose of this report is to be informative for members of Congress before they vote. We have no idea how the report may score the benefits of enhanced intellectual property protection and the new financial services rules, but the auto changes are likely to be a drag on growth, all else being equal. In our view, the cost of automobiles will be increasing from this deal but partially offset by the new jobs created. This may not matter much if the other parts of the agreement lift growth more, but you can see the press having a field day with Trump if the agreement lowers growth in the aggregate.

Trade headlines heavily influenced the major indices last week.  The Dow Jones Industrial Average fell -1.9%, the Russell 2000® Index fell -0.92% and the S&P 500® Index lost -0.54%.  The Nasdaq rose 0.74%.  For the month of September, the Dow and S&P 500® rose 1.9% and 0.43%, respectively.  The Nasdaq fell -0.78% and Russell 2000® declined -2.54%.  Overall, favorable economic data and news about trade, Brexit and the OPEC meeting headlined a rather quiet month.  Oil prices rose this week as OPEC decided against production increases to compensate for the impending loss of Iranian oil when the November trade ban takes effect.  Analysts, are questioning OPEC’s capability to increase production, are increasingly speculating about the potential for oil prices to reach $100 per barrel.

Last weekend, China cancelled upcoming high level trade talks after the U.S. imposed its latest round of tariffs; on Monday, China published a white paper which attacked the "protectionist" and "trade bullyism" practices of the U.S. administration.  The U.S. signed a trade agreement with South Korea and agreed to begin negotiations with Japan on a new trade pact.  Facebook and Tesla sold off in Friday trading.  Facebook fell 2.59% after reporting a security breach potentially effecting 50 million users.  And, the two co-founders of Instagram, a significant revenue generator for Facebook, announced their upcoming resignations on Monday.  Yesterday, the SEC filed a civil fraud suit against Elon Musk for allegedly lying to investors when he claimed (on Twitter) that he had secured funding to take Tesla private; the suit seeks to ban Musk from corporate leadership.  This suit was settled over the weekend with the company and Musk each paying $20 Million dollar fine. As part of the deal, Musk had to resign as Chairman of Tesla. The stock closed 13.9% lower on Friday as investors weighed the potential fallout, but is up 14.72% today on the settlement news .  Also, the Federal Reserve raised interest rates 0.25% and reiterated its expectation for another increase in December.  The yield on the 10-year U.S. Treasury Note, which rose earlier in the week, fell after the widely-expected announcement.

In a few weeks the upcoming earnings season will add color to the generally favorable outlook of the global economies.  Some economists anticipate a reduction in global growth due to trade concerns and the impact of lower demand in emerging countries if oil prices continue to rise.  During September, stock prices for smaller companies in the Russell 2000® retreated from their August highs.  Earnings results may provide an opportunity for renewed growth. 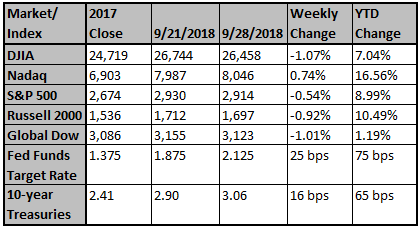 So much for September being awful for stocks

Amazon Hands Out Small Raises to Warehouse Workers, But S...

The average Amazon warehouse worker receives at least $15 an hour before overtime.