Investors still seem to be underestimating the revitalizing effects of the fiscal stimulus and regulatory easing while overestimating the potential negative impact of a “trade war.” This suggests to us an increase in real GDP, inflation, bond yields, earnings, and stock prices as the year progresses. The pace of stock price appreciation (the multiple), however is likely to slow as the real economy lures liquidity away from financial assets. We continue to have a bias of value over growth and small caps over large. Internationally, we still like Japan.

Last week began with positive news that the U.S. and Canada reached agreement on a NAFTA replacement; the tri-party agreement will now be submitted to each country’s legislature for approval.  News that Italy sought to significantly widen the country’s budget deficit targets, and commentary from various Federal Reserve Board members, overshadowed the trade agreement.  The Dow Jones Industrial Average reached a new record high on Tuesday before retreating; for the week, the DJIA fell 0.04%; the S&P 500® Index lost 0.98% followed by the Nasdaq (-3.21%) and the Russell 2000® Index (-3.80%).

The new Italian government initially set a three-year deficit target of 2.4% for the upcoming three-year period; the optimistic plan anticipated that social spending would spur growth.  The deficit plan unnerved both the financial markets and the European Commission; Italian bonds, and the Italian banks which hold most of the bonds, sold off.  The Italian Economy Minister subsequently pledged to reduce the deficit in future years yet skepticism remains.  In the U.S., Fed commentary highlighted the view that the economy is performing well, and that future rate increases will be necessary to moderate inflation.  Chairman Powell’s statement that the economy “is a long way from neutral at this point” was interpreted as a more hawkish sentiment.  The yield curve steepened as Treasuries sold off; the 10-year U.S. Note rose 18 basis points to close at 3.23%, a seven-year high, while the 30-year reached a four-year high.  Employment news on Friday supported the Fed commentary: the unemployment rate fell to 3.7%, a low not seen since December 1969; 2.8% annual wage inflation remains within the expected range.  Technology and small cap stocks bore the brunt of the selloff over worries that the economy might slow and higher interest rates would dampen expansion.

Global trade issues remain top-of-mind; talks with Europe and Japan provide a sense of optimism for a likely agreement; the heightened rhetoric between the U.S. and China, though, suggest that no agreement is imminent.  China is taking steps to stimulate growth such as suspending environmental reform financial incentives to boost corporate spending.  Commentary during the upcoming earnings season will provide additional color as companies discuss the impact of tariffs on sales and revenues and their expectations entering 2019.

Investment and capex are key to extending the business cycle in the US.  Capex (Capital Expenditures) that boosts productivity enough to allow wages to rise without putting too much pressure on margins is required to extend the business cycle. We remain of the view that we are more mid-cycle than end of cycle and are monitoring the real fed funds rate, corporate profits and average hourly earnings to look through the noise and gauge the health of the economy and business cycle.

This week Q3 earnings seasons kicks off, JPMorgan, Citibank and Wells Fargo report earnings and will comment on the potential impact of higher interest rates.  Across the economy, higher interest rates will benefit financially strong companies as weaker competitors are hampered by higher debt costs.  Inflation enables many companies to generate higher earnings by raising prices.  The current market fears are likely linked to the normalization of interest rates.  Investors may need some time to adapt; thus far, though, the economic data support continued growth with no signs of recession on the near-to-intermediate horizon. 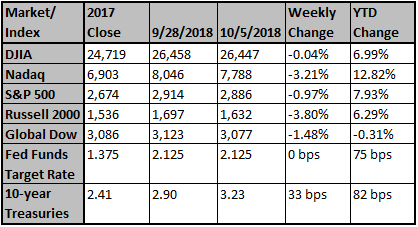 Bitcoin has fizzled, but digital transactions are thrivin...

More transactions than ever are being made digitally-we shop online, and use phones to hail taxis, order food, and swap money with our friends. But