We continue to watch for updates on the global health situation, which will inform the policy response. “Initial data from a major hospital complex in South Africa’s omicron epicenter show that while Covid-19 case numbers have surged, patients need less medical intervention … Most originally sought treatment for ailments unrelated to the coronavirus and were discovered to have it in testing required for admission.” (Bloomberg)

In the meantime, the U.S. economic data have shown momentum thru November (pre-variant). Pending home sales (a leading indicator) rose +7.5% month over month in Oct. The ISM manufacturing PMI was strong at 61.1% in Nov. The svc PMI was a record at 69.1(!) in last month’s reading.

Central banks have been under increasing pressure to deal with inflation. Looking at U.S. core goods prices, the 2021 price surge is happening after years of these prices not moving at all. That sticker shock is likely reducing consumer sentiment. There could be some catch-up in services prices coming in 2022. Particularly concerning would be “sticky” services price increases (eg, rents set by contract, wages), and indications that firms plan on increasing prices year after year.

As we’ve noted previously, the decline in global energy prices helps this particular issue near-term, but not in a good way. Part of the problem has been the shift in spending to goods vs. services (clogging up ports & global supply chains). U.S. services spending resuming could have removed some of this pressure. That looks partly delayed now due to renewed health uncertainly.

True, the U.S. payroll employment report missed elevated expectations at +210,000 month over month in November. However, there were upward revisions of +82,000 jobs to prior months, which is a partial offset. More importantly, the household survey surged in Nov, with the headline U.S. unemployment rate falling to 4.2% and the labor force participation rate rising to 61.8%.

Stimulus payments have ended, but there was a saving cushion for many individuals. Perhaps that cushion is starting to ebb as well … resulting in a return to work. Average hourly earnings rose +0.3% m/m and 4.8% y/y, which was slightly less than expected. It’s too early to definitely say there is a moderation here, but the monthly number is slightly below prior upside surprises.

Bottom line: we look to be in the neighborhood of full employment … while still conducting emergency monetary policy. Quantitative easing (QE) is still easing. The Fed has already started its QE exit (taper). There’s likely enough data (growth + inflation) to accelerate the taper in 2022, in our opinion. If the FOMC had not already given forward guidance (a tool in its own right) that there would be a taper, it might have made sense to stop asset purchases altogether.

Put another way, we look for the Fed to take their foot off the gas pedal, as there is little reason to pull more demand into a supply-constrained economy. They will likely want to wait and see how hard they will have to push on the brake in 2022, however.

Worth factoring in, the market is moving quickly, ahead of the Fed (eg, the 10yr/2yr U.S. yield curve). So there may be less for the central bank to do. There is already some evidence of a moderation in U.S. wages. “Peak bottleneck” in 2022 should be followed by “peak inflation” as the flow of goods improves & labor supply continues to show up. Any 2022 gain in productivity growth could also help create a pathway to a softer landing. Hawkishness on QE (less easing) does not have to immediately translate into hawkishness on 2022 rate hikes (more tightening).
Source: Strategas 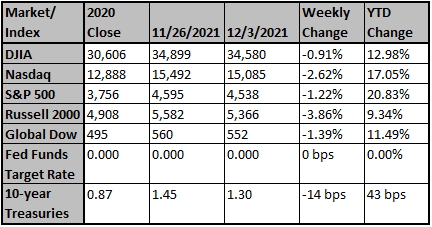 LONDON (Reuters) - Britain still has an acute shortage of heavy goods vehicle (HGV) drivers but the rate at which people are leaving the sector is at least slowing, an industry group said...

Officials have laid the groundwork to more quickly end a pandemic-era stimulus program at their meeting next week.