Small and Mid-Cap companies have been the best performing sector of the market this year and last week was no exception. The Russell 2000® Index, last week’s best performer, rose 0.80% followed by the Nasdaq which gained 0.35%.  The S&P 500® Index and the Dow Jones Industrial Average lost 0.25% and 0.59%, respectively.  Small cap stocks continued to perform well; strong earnings reports and upwardly revised guidance supported the momentum provided by the economy.  A survey among economists projected a 3.0% GDP rate for 2018, an improvement over surveys conducted last month (+2.9%) and a year ago (+2.4%).  Also, Japan reported quarterly GDP growth of 1.9% with increases led by consumer and capital spending.

In light trading, the markets sold off on Friday in reaction to concerns that Turkey could become the next Greek tragedy.  The lira declined as much as 20% on Friday, and the superheated economy has exposed the vulnerabilities of some European banks which hold substantial Turkish debt.  Friday’s announcement by President Trump of new additional steel and aluminum tariffs on Turkey added another layer of concern.  Most strategists, though, do not expect a major crisis as the exposure of European banks is much more limited than during the Greek financial crisis.

Over 90% of the companies in the S&P have reported quarterly earnings; approximately 84% have exceeded earnings estimates and, amongst companies in the Index, upward revisions for 2018 earnings estimates have increased by 10.8% year-to-date.  Corporate news beyond earnings releases was rather sparse.  Elon Musk tweeted that Tesla is considering a leveraged buyout to become a private company; the Board plans to discuss the matter next week.  On the trade front, President Trump announced plans to add another $16 billion of tariffs on Chinese imports.  Predictably, China reciprocated by announcing a similar amount of tariffs on U.S. goods while notably omitting oil imports from the list.  Unofficially, the two countries may be engaging in informal dialogue which might lead to more formal negotiations.

The markets’ upward bias continues, with the expectation of further gains through the end of the year.  Corporate earnings and strong economic data are the key drivers.  Call options, which enable investors to buy at current prices and potentially exercise if stock prices move higher, have been in high demand.  Month-to-date, all major indices (except the Dow) have gained despite light end-of-summer trading volumes. 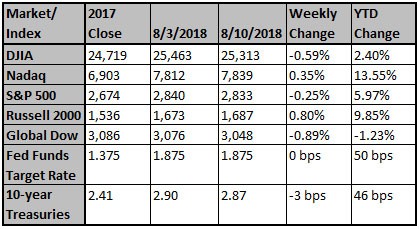 Mexico and the U.S. have agreed to step up talks in hopes of reaching an agreement on major issues by August

California's huge energy decision: link its grid to its n...

It's partly a decision about clean energy - with a huge trade off. California is Anerica's undisputed clean-energy leader, a kind of cultural and economic islan, liberal enough to pass...