The major indices, with the exception of the Nasdaq, ended higher for the week despite heightened volatility.  The Dow Jones Industrial Average rose 1.41%; the S&P 500® and the Russell 2000® Indices rose .59% and .36%, respectively.  The Nasdaq’s -.29% decline was due, in part, to a sell-off in Tesla; the company disclosed an SEC subpoena of directors following the tweet from CEO Elon Musk about a pending deal to take the company private; the SEC was already investigating potentially misleading statements about the Model 3 production levels.  Poor results from Chinese internet service provider Tencent, and disappointing guidance from Applied Materials and NVIDIA, further pressured Technology stocks.  In contrast Walmart, Tapestry and Nordstrom gained impressively after reporting better-than-expected earnings; e-commerce initiatives have gained traction as each company pushes to compete with Amazon.

Capital spending continues to strengthen. The second quarter saw another solid rise in spending. Capital expenditures rose 17% year-over-year, with the technology sector leading the way. Although trade concerns have not yet weighed on capex levels, policy uncertainty could negatively affect future planning.

Turkey’s currency crisis sparked much of last week’s market volatility as the lira declined dramatically early in the week; the government has not intervened to raise interest rates or take other measures which might stabilize the currency.  Thursday’s announcement by Qatar of plans to invest up to $15 billion in Turkey offered some relief.  Back in 2009, the Turkish government encouraged companies to fuel the country’s growth with foreign loans.  The loans, many in U.S. dollars, were successful in stimulating economic growth.  Now, however, the pressure on the lira risks serious economic damage as those loans become due.  And, political tensions between the U.S. and Turkey have added to the country’s economic pressures.

Trade issues appear to be improving on the margin, but we expect this issue to linger. President Trump decided last month to seal agreements on NAFTA and with the European Union, likely to gain traction on a harder line with China. Chinese officials are due to travel to the U.S. for another round of negotiations later this month, some speculate that the discussions may pave the way for a trade summit between Presidents Trump and Xi Jinping in November. We caution investors not to read this as an overly optimistic sign. We still expect trade issues to surface and perhaps escalate, and see little hope of significantly easing tensions this year. 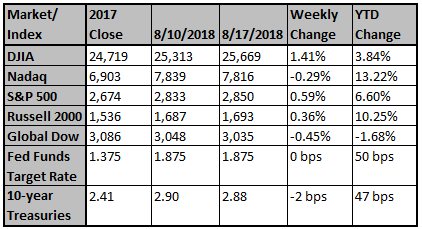 The Trump administration said it's weighting whether to increase the proposed tariff on $200 billion of Chinese goods to 25 percent from 10 percent, stepping up pressure on Beijin to chan...

Market Extra: Why this bull market may have miles to go b...

The bull market on stocks is on the verge of setting a record for longevity, but may have much further to run, say technical analysts.

The Dow Jones Industrial Average is on the brink of bursting out of correction territory for the first time in more than six months, underscoring some signs of renewed optimism on wall street.

The ongoing rally in stocks since early 2009 could hardly have been predicted -- the question now: When will it end?