Stagflation update based on Q3 Data

We believe we are seeing the peak in the 2021 stagflation scare, with the 3Q data reports from the U.S. last week & the weak China manufacturing PMI in Oct. There’s still plenty to worry about, as growth has stalled & bottlenecks keep inflation elevated. Wage pressures are building. Energy prices remain elevated. Yet these stories are becoming well known.

There are key positives for economic growth. European 3Q GDP data was solid q/q. The U.S. yield curve is not inverted & consumer saving remains substantial. Household balance sheets are in good shape overall. U.S. initial jobless claims fell to 281,000 last week, and continuing claims fell sharply in the prior week. Job openings remain plentiful. Quits are a sign of some confidence (in contrast to surveys like U of Mich).

True, 3Q overall was troublesome in numerous places on both the growth & inflation numbers. We’ve previously discussed the weak readings from China in this quarter. U.S. nominal GDP was 7.8% q/q A.R. in 3Q (good), with the GDP deflator at 5.7% (not good). U.S. real GDP slowed considerably, though it was still positive at 2.0% q/q A.R. Consumer spending contributed +1.1% points, nonresidential fixed investment +0.2%, housing -0.4%, inventories +2.1%, trade -1.1%, and govt +0.1%. Within consumer spending, the motor vehicle component subtracted a large -2.4% points from GDP. Supply-chain issues have been key.

There may be an inflection point developing, however: “General Motors Co. is bringing back overtime shifts at several plants in November as it works through the global chip shortage that has led to canceled regular and overtime shifts since February.” (Detroit News)

Compensation readings surged in the U.S. Employment Cost Index (ECI) in 3Q, which rose +1.3% q/q. But there is some recent progress on the labor front: “U.S. tractor maker Deere & Co agreed on a new six-year contract with the United Auto Workers (UAW) union that would be subject to a vote by the company's striking workers, the company said in a statement on Saturday.” (Reuters)

Energy remains the biggest wild card, in our opinion. Yet there was even some progress on the global energy front: the FT reported that gas prices in the UK & continental Europe fell by as much as a fifth on Friday on signs Russia will increase exports.

Bottom line: solid demand has been held back by restricted supply of product (eg, semis), transportation (ports, school buses), labor, and energy. Time should help fix the product & transportation bottlenecks, and there’s evidence the labor market is improving (even if it is not a straight line, as vaccine mandates result in layoffs). Supply can rise to meet demand.

As we’ve noted previously, it isn’t “1970s bad”. As firms change the way they do business to combat this issue, output-per-hour (productivity) gains are starting to occur. Productivity allows the opposite of stagflation: stronger growth and muted inflation, since there are more goods & services produced. Straining the global economy in ways it has not been tested since the 1970s can result in different business processes now, out of necessity. In this way, the private sector can come to the rescue of central banks, which are starting to get nervous about 2022 inflation (eg, Bank of Canada last week).
Source: Strategas 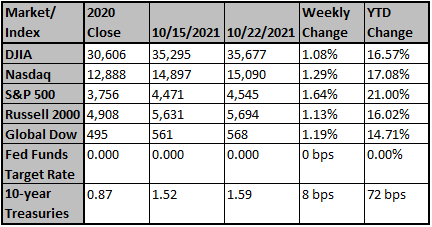 The Federal Reserve chairman used the bulk of a widely anticipated speech in late August to explain why he was still confident that this year's inflation surge would prove temporary. His ...

Stocks mixed ahead of elections, Fed meeting, Under Armou...

U.S. stocks hovered near record levels as investors digest more earnings and as the Federal Reserve kicks off its two-day meeting.

A closely-followed index of U.S.-based manufacturing inched lower to 60.8% in October from 61.1% in the prior month, the Institute for Supply Management said Monday.