The S&P 500 Index declined 27 basis points last week after three straight weeks of gains. The index is currently up 3.82% in July which has helped push it back into positive territory for 2020 after the February-March steep market decline. Equities were up early in the week, but reversed course on Thursday with information technology, consumer discretionary, and communication services being the hardest hit sectors. Negative jobs data, along with increasing COVID-19 cases causing a decline in consumer spending in parts of the country, raised concerns over the economic rebound potentially stalling. U.S. initial jobless claims of 1.42 million were higher than the consensus estimate of 1.3 million and the previous week’s claims of 1.3 million. This was the first increase in jobless claims since the high of 6.87 million on March 27, breaking a 15-week stretch of declines. Crude oil closed at $41.29 per barrel on Friday, increasing 1.72% for the week. FirstEnergy Corp, a public utility holding company, was the worst performing stock in the S&P 500 Index, returning -30.04%. The stock was trampled after reports of an investigation into the company’s possible involvement in a $60 million bribery scheme that led to the arrests of five individuals, including the Ohio House Speaker. Intel Corp, a computer chip manufacturer, returned -15.68% last week. The company had a positive earnings announcement Thursday night beating expectations but delivered negative news about their future 7-nanometer chips being delayed approximately six months over manufacturing issues. This not only caused the stock to tank on Friday, but also helped drive up its rival, Advanced Micro Devices Inc.,16.50% on Friday as the semiconductor company already markets 7-nanometer chips. The stock climbed 26.09% last week, claiming the best performance in the S&P 500 Index. Homebuilders PulteGroup Inc. and NVR Inc. returned 14.26% and 13.99% respectively as the companies announced increases in second quarter orders. US new home sales increased to a 776K annualized rate, the highest since July 2007. Earnings announcements expected this week include Apple Inc., Amazon.com Inc., Alphabet Inc., Facebook Inc., Visa Inc., Pfizer Inc., PayPal Holdings Inc., Advanced Micro Devices Inc., and many others.

Treasury yields dropped over the course of the week on increased geopolitical tensions between the United States and China, along with disappointing economic data. Yields started the week higher as positive trial results showed that progress is being made toward a vaccine and on expectations of stimulus packages in the U.S. and EU. However, the U.S. State Department told China to close its Houston consulate on Wednesday in an attempt to protect American intellectual property and private information. China’s Foreign Ministry spokesperson pledged retaliation if this path was continued saying that this was an unprecedented escalation. On Thursday, the U.S. Secretary of State called on foreign governments to join the U.S. in confronting China, and China then ordered the U.S. to close its consulate in Chengdu. These geopolitical tensions caused yields to fall as investors began to seek the perceived safety of Treasuries. On Thursday, initial jobless claims rose by 109,000 to 1.416 million, suggesting that the economic recovery has slowed with the recent increase in Coronavirus cases and corresponding social distancing measures.
Source: First Trust 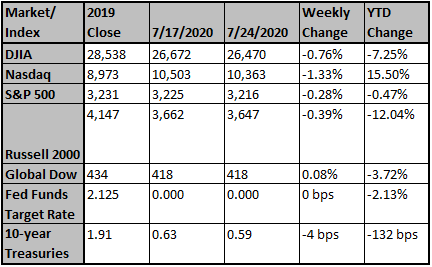 In a letter to employees obtained by FOX Business, Southwest chairman and CEO Gary Kelly vowed that the airline will not furlough or layoff any of its employees on Oct. 1.

New orders for key U.S.-made capital goods increased more than expected in June and shipments accelerated, but the gains were likely insufficient to avert a historic plunge in business in...