The market rally continued last week with the end of the government shutdown on Monday and as strong corporate earnings and economic data recharged bullish sentiment.  All of the major indices closed at record highs; yet, investors continued to favor large cap stocks over smaller company shares.  Treasury yields stabilized after rising by roughly 0.25% year-to-date.  One might describe these conditions as a ?Goldilocks? environment: the rate of economic growth is sufficient to support rising corporate profits, but not so robust as to prompt the Federal Reserve to aggressively raise interest rates.  Business executives seem to share this optimism: the value of merger and acquisition transactions announced so far this year is the highest since 2000.  Meanwhile, Brent crude oil, the international benchmark, surpassed $70 per barrel for the first time since 2014; the gain reflects the improving global economy as well as increased cooperation between OPEC and Russia on production levels.  Also this week, the Senate confirmed Jay Powell as the next Fed Chair; the appointment serves as an endorsement for the continuation of current monetary policy.  The likelihood of accelerating economic growth along with an accommodative Fed contributed to record global equity fund inflows.

The U.S. dollar made headlines this week; Treasury Secretary Steven Mnuchin commented on Wednesday that a weak dollar would help the U.S. trade balance in the short term.  Since January 2017, and following a nearly 30% increase from 2014 to 2016, the ?greenback? has declined nearly 15% against a basket of major currencies.  The recent weakness can be attributed, in part, to the improving global economic outlook.  In particular, Europe is showing signs of resurgence as an early reading on economic activity in the Euro zone reached a 12-year high.  Also, Japanese exports increased 9.3%, and U.K. labor conditions improved with the highest level of job growth since July and the largest wage increases since December 2016.  Indeed, the International Monetary Fund (IMF) cited improvements in the U.S., Europe, and Japan in updating its 2018 global economic growth forecasts by 0.2% to 3.9%.  Notably, the IMF highlighted tax reform in raising U.S. GDP growth forecasts by 0.4% to 2.7% in 2018, and by 0.6% to 2.5% in 2019.  In the U.S., GDP grew 2.6% in the fourth quarter for the 15th consecutive quarter of growth; the figure fell slightly short of analysts? estimates, although underlying data point to sustained momentum in 2018.  Consumer spending increased 3.8%, and non-residential investment, a proxy for business spending, grew 6.8%.

So far, 133 companies in the S&P 500? Index have reported results; of these, 79% have met or exceeded analysts? sales estimates and 85% have met or exceeded analysts? earnings per share (EPS) estimates.  The blended sales growth rate (which takes into account actual and forecast results) currently stands at 7.1% while the blended EPS growth rate is 12.3%.  Tax reform, including the repatriation of funds held overseas, has been the dominant subject on earnings conference calls as companies are raising earnings guidance and announcing plans for new hiring and investment.  Companies are also ear-marking funds for mergers and acquisitions, share repurchases, dividends, and debt reduction.  The positive response by investors to these initiatives have enabled the third longest bull market in history to continue reaching new highs.

At least 3 million Americans are receiving special tax reform bonuses.  Thanks to the Tax Cuts and Jobs Act, at least 273 companies have already announced wage and salary increases, bonuses, or 401(k) match increases, according to a list compiled by Americans for Tax Reform. The list, found at www.atr.org/list is being continuously updated. 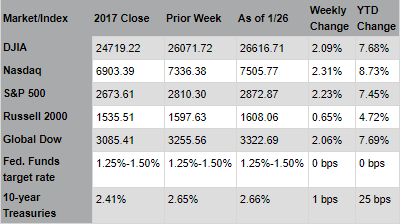 The last few days of January into February include several important economic reports. Personal income, consumer spending, and consumer prices for December are important indicators of economic strength and inflationary pressures in the consumer sector. The latest report on employment is out at the end of the week. The number of hires for new jobs slowed a bit toward the end of 2017. Also, wages are expected to show only marginal growth for December and 2017.