Government Shut Down averted for the time being, Earnings and Tax Plan are driving the economy and financial markets

Stocks rose during a volatile week last week as concerns over a potential government shutdown and rising interest rates weighed on investor sentiment.  Investors have temporarily retreated from riskier areas of the market: sectors that had been performing well over the past few weeks, such as Energy and Industrials, lagged while Consumer Staples (including food, beverages, and household products), Health Care, and Technology outperformed.  Also, large cap stocks outpaced small caps.  The government closed on Friday evening after the Senate could not pass a spending extension. The Senate reopened the Government today (Monday) for an additional three weeks in hopes that an Immigration deal can be struck before that funding deadline comes again.  The funding has nothing to do with Immigration, but the Senate cannot get the 60 votes needed to pass a budget unless they address Immigration and DACA now. We will stay tuned to see how things work out here.

Regardless, we are not too concerned with the economic or financial impact of a government shutdown, particularly as $200bn of tax cuts are delivered in CY 2018. Meanwhile, the yield on the 10-year U.S. Treasury Note rose to 2.66% to reach its highest level since 2014.  Investors are monitoring rising interest rates as a potential risk to the equity bull market.  Economic data remain supportive of positive market momentum: industrial production surged in December; homebuilding permits remain near a two-and-a-half year high; and, weekly jobless claims fell to a 45-year low.  Also, Apple announced plans to pay a one-time tax bill of $38 billion to repatriate its foreign cash holdings; the repatriated funds ($252.3 billion) will be used, in part, to build a new campus for technical support, open data centers, and hire 20,000 workers.  The announcement is an early indication that companies are responding to corporate tax cuts by re-investing proceeds into their businesses and the U.S. economy.

Earnings season is underway: thus far, 53 companies in the S&P 500? Index have reported results; of these, 83% have met or exceeded analysts? sales estimates and 79% have met or exceeded analysts? earnings per share (EPS) estimates.  For the quarter, sales are expected to increase 6.9% while operating income is expected to increase 12.8%; EPS, meanwhile, will likely decline -0.2% due to one-time tax payments, including repatriation, and charges related to tax reform.  Bank of America reported better-than-expected earnings with strong loan growth and interest income; Goldman Sachs also beat analysts? estimates even though fixed income trading weighed on results.  And, American Express declined after reporting its first quarterly loss since 1992; the company paid a $ 2.6 billion repatriation tax and suspended the share buyback program.  On Friday, reports surfaced that the Federal Reserve may relax bank capital requirements; the move would free up substantial funds that could be redirected to lending activity, acquisitions, dividends, or share repurchases.  Also, International Business Machines reported its first quarter of revenue growth in five years; the company is migrating its business towards emerging growth areas including cloud computing, artificial intelligence, cyber security, and blockchain technologies.  Investors remain skeptical, though, as shares declined 4% following the results.  This week, 76 companies in the Index, including Halliburton, Netflix, Johnson & Johnson, Procter & Gamble, Verizon, General Electric, Ford Motor, Southwest Airlines, Intel, and Starbucks report earnings. 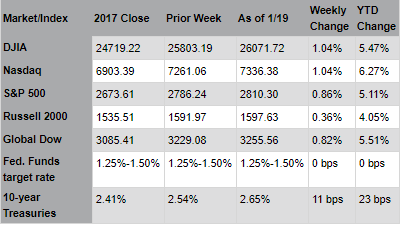 So you say the tax cut is a bad idea? We recommend taking a closer look
Read Story >>

The first report on the fourth-quarter gross domestic product is out this week. Economic growth exceeded 3.0% in the third quarter and is expected to remain about the same for the last quarter of 2017. Also, reports on the housing sector for December are available this week.