The major indices, with the exception of the Russell 2000® Index, which has dominated markets for most of this year, closed higher last week even after a mid-week pullback following the announcement by the U.S. of an additional $200 billion worth of tariffs on Chinese goods in late August.  As of Friday, the Chinese government had not yet responded.  The equity markets rebounded strongly on Friday; for the week the Dow Jones Industrial Average led the indices with a 2.30% gain; the Nasdaq rose 1.79% to close at an all-time high; and the S&P 500® Index rose 1.50% to close above 2,500 for the first time since February 1st.  The Russell 2000® closed fractionally lower for the week (-0.41%). The Dow’s advance into positive territory YTD suggests that investors remain skeptical of an all-out trade war.  Importantly, by Friday, both the U.S. and China signaled that they were open to resuming trade negotiations.  The latest trade salvo would add a 10% tariff rather than the 25% tariff that was implemented earlier on steel and other products.  China is increasingly unlikely to retaliate with additional tariffs; the limited amount of goods imported from the U.S. would make additional tariffs unfeasible.  They may, however, identify other steps to impede commerce.  China is seeking new trade alliances with Europe; this week, BMW announced that it may receive approval for a majority ownership position in a joint venture with Brilliance China. Meanwhile, the U.S. Department of Commerce lifted the ban on sales by U.S. suppliers to ZTE Corporation (China’s second largest telecommunications company).

Earnings season started on Friday with JPMorgan and Citigroup beating analyst earnings estimates; Wells Fargo’s challenges continued as the company missed earnings due mortgage loan weakness and other charges.  These companies fell on the news as investors remain concerned that trade tariffs may cause the Federal Reserve to take a more cautious approach on interest rates.  JP Morgan’s Chairman James Dimon commented that the economy is charging ahead on most fronts, and the tariff disputes are “affecting psyches more than economics.”  Earnings season will be in full swing next week with reports from Johnson and Johnson, Honeywell, Microsoft and American Express.

Politics regarding trade, NATO, Brexit, oil prices and the U.S.-Russian summit have recently dominated the headlines.  This week, investors will gain more of a “boots on the ground” perspective as companies provide commentaries on the success of their growth initiatives and expectations for the second half of the year.  Investors will no doubt look for answers on the immediate impact of these political events.  At this point, the market still seems biased to the upside; earnings season will provide an important barometer in determining sentiment going forward. 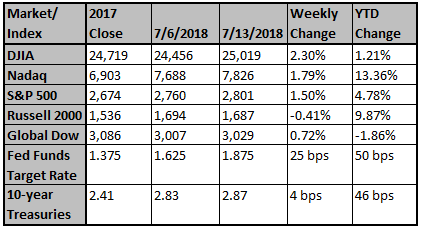 1. The number of job openings edged down to 6.6 million on the last business day of May, the U.S. Bureau of Labor Statistics reported today. Over the month, hires and separations were little changed at 5.8 million and 5.5 million, respectively. Within separations, the quits rate and the layoffs a...

The U.S. Could Soon Reclaim the World's Oil Crown

AI Is Transforming Healthcare as We Know It. Here's a Loo...

Artificial Intelligence companies are taking on the health industry with big results for consumers. Here are the pros, cons and potential business opportunities.

The Truth About Health Care Costs in Retirement

Wall Street research often dwells on what's known as "tall risk," a catchphrase for a dramatic outlier event that upends the best laid plans. So here's a warning: you may well confront a...