The Bond Market, a number of market analysts and President Trump were all ahead of the Federal Reserve once again, in calling for possible rate cuts in 2019, even though there were no signs of recession yet. For several months last year there were calls that the Federal Reserve was tightening too quickly by raising rates and reducing their balance sheet at the same time (policy that had never been done before). The bond market signaled that the Fed was more than a little aggressive in tightening. Finally, we are at a point where the Federal Reserve seems to listening to the data better.

The equity markets’ multi-week losing streak ended on expectations that the Federal Reserve may cut interest rates perhaps as early as this month. Fed Chairman Powell stated that the central bank will “act as appropriate to sustain the expansion,” and other Fed officials indicated a willingness to reduce interest rates to sustain economic growth in response to the potential slowdown from the trade disputes. The DJIA led all indices with a 4.71% gain followed by the S&P 500® Index (4.41%), the Nasdaq (3.88%) and Russell 2000® Index (3.34%).

In May, employers added only 75,000 jobs; still, unemployment remained at 3.6% and new claims remained near recent lows. Investors welcomed the low new jobs number on the assumption that the report will provide support for the Fed to lower interest rates. Also, job gains in March and April were revised lower by 75,000 jobs; the three-month average of 151,000 is well below the 238,000 level at the start of the year. Severe rains and flooding may have contributed to the low numbers; for example, farmers are facing the worst crop planting conditions in over thirty years.

On Wednesday, the U.S. and Mexico began negotiations aimed at stemming migrants from entering the U.S. in order to avoid President Trump’s 5% tariff due to become effective on Monday. The tariffs would hurt both economies: the U.S. imports many products, notably auto industry-related products, while oil exports to Mexico may be subject to retaliatory tariffs. Some economists believe that a tariff increase beyond the initial 5% level could push Mexico into recession. Late Friday afternoon, President Trump accepted Mexico’s offer of tougher immigration enforcement as sufficient to dissuade him from levying a 5% charge on all Mexican imports.

President Trump indicated that he will wait until after this month’s G20 meeting to decide on extending tariffs on another $300 billion of Chinese imports. U.S. and Chinese officials are expected to meet during the G20 to discuss the terms on which to restart trade discussions. Many companies are quietly expediting plans to reduce exposure to tariffs by moving production out of China.

Companies are nearing the “quiet period” prior to reporting second quarter earnings. Global growth continues albeit at a slower pace; the World Bank recently revised 2019 estimates of global economic growth from 2.9% from 2.6%. The domestic equity markets remain volatile in response to progress, or lack thereof, in trade negotiations. Second quarter earnings should shed some light on the impact of trade concerns on individual companies. Headline news will likely sway market sentiment for the remainder of the month. 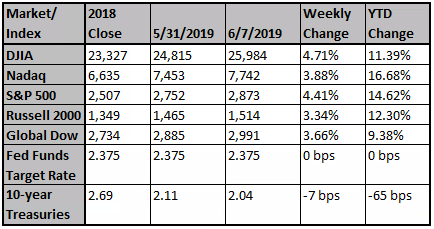 1. Economic activity in the non-manufacturing sector grew in May for the 112th consecutive month, say the nation's purchasing and supply executives in the latest Non-Manufacturing ISM Report On Business. The report was issued today by Anthony Nieves, CPSM, C.P.M., A.P.P., CFPM, Chair of the Insti...

U.S. stock futures indicate a positive start for Wall Street on Monday after the U.S. removed the risk of import tariffs on Mexico, and as investors continue to look for the Federal Reser...

The US economy is the world's 'bright spot,' and there's ...

There are no signs that the U.S. economy may be heading into a recession, according to Treasury Secretary Steven Mnuchin. Speaking to CNBC on Sunday,

Markets can cheer: China appears to finally be addressing...

The German trade surplus is stifling the economic growth in the rest of Europe, Michael Ivanovitch writes.