The pricing in of political risk has clearly become much more complicated in the past month, as the U.S. Administration has switched from a focus on tax cuts & deregulation to tariffs (or tariff threats) & increased tech regulation/antitrust.  This may not end anytime soon.  The offset will have to be elsewhere, and the market looks willing to give other actors (like central banks) the benefit of the doubt, at least for now.  We continue to stay tuned.

Last week, the equity markets moved modestly higher on lighter volume in response to headline events.  The Nasdaq gained 0.70% followed by the Russell 2000® Index (+0.54%), the S&P 500® Index (+0.47%) and the Dow Jones Industrial Average (0.41%).  The markets, though, lacked conviction as investors await this week’s Federal Reserve meeting, and the likelihood of a meeting between Presidents Trump and Xi at the G20 summit later this month.

Trade remains the fundamental risk to global growth as trade negotiations between the U.S. and China remain stalled.  The impasse has created economic challenges for both countries.  With the embargo on Huawei telecommunications, the company has limited access to major software or hardware necessary to introduce its next generation products.  The U.S. ban on Huawei products has led to order cancellations for U.S. component manufacturers.  For example, Broadcom reduced revenue guidance by $2 billion as a result of the ban on selling to Huawei and the uncertainties related to the trade disputes on demand by other customers.

The Fed may cut interest rates to support economic growth.  Many analysts, though, expect the Fed to gather more data before lowering rates; they look to a possible announcement in July.  Other concerns last week involve the risk of disruptions in oil supplies following the attack Thursday on two oil tankers in the Strait of Hormuz.  Oil prices, which had fallen on Wednesday following reports of a higher-than-expected inventory, reversed course after the attacks.

Companies effected by trade disputes are seeking alternatives to moderate the impact of tariffs.  Investors anxiously await management commentaries during the upcoming earnings season on the steps taken by individual companies to mitigate the financial damage.  In the meantime, the lack of investor conviction will likely continue until evidence of progress emerges. 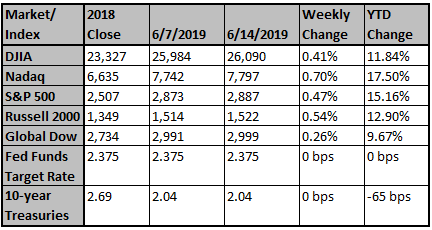 What happens if President Donald Trump carries out his threat to impose tariffs on the reminaing $300 billion in Chinese goods that he hasn't already hit with 25% import taxes?

Case for Cutting Rates Can Be Found in Close Calls of the ...

The Federal Reserve usually cuts interest rates because bad things are happening. Sometimes, though, it cuts rates because the risk of bad things has gone up-like taking out an insurance ...

Wall Street should stop worrying about Beijing going exercising the option to get even with Washington's sanctions against Huawei.