Markets were mixed last week as the Financials sector rallied while Technology lagged. On Wednesday, several banks announced dividend increases and share buybacks; the decisions followed the Federal Reserve’s determination that, for the first time in seven years, all of the banks subject to its Comprehensive Capital Analysis and Review (CCAR), the so-called “stress test,” had passed. Higher yields on Treasury bonds further supported the favorable outlook for financial companies. The technology-heavy NASDAQ underperformed as investors, in weighing the sector’s attractive growth prospects against strong year-to-date gains, may contemplate rotating into other areas. 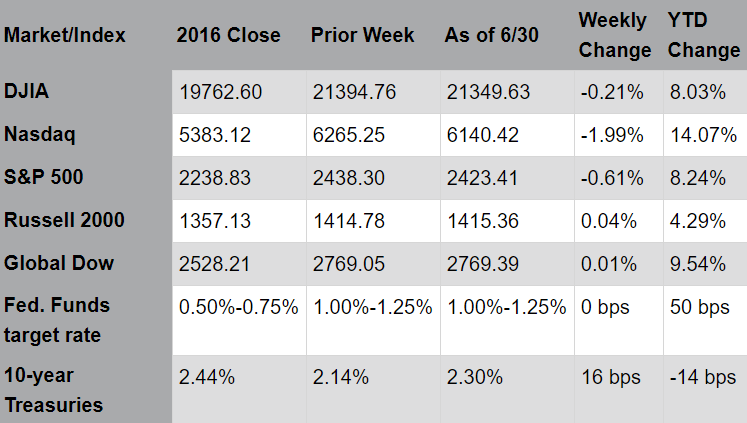 Small cap stocks, which have trailed large and mid caps thus far this year, may be a potential destination for these funds. Meanwhile, economic data remain generally supportive. The final estimate for first quarter GDP was increased to +1.4%, driven by a higher estimate for consumer spending; measures of consumer confidence are near 13-year highs. Still, the economy remains on a slow growth trajectory as durable goods orders declined and inflation eased. After oil prices fell into bear market territory last week, the sector recovered as overwhelmingly negative investor sentiment subsided. A slight increase in crude oil inventories was more than offset by reductions in supplies of refined products, including gasoline and distillates.

The results for the first half of the year are in: the S&P 500® Index and the Dow Jones Industrial Average posted their best performance in four years while the NASDAQ posted its best result since 2009; Technology and Health Care stocks enjoyed the strongest gains while the Energy sector was a notable laggard. Importantly, though, the market continued to advance despite the decline in oil prices during the second quarter. Moreover, and in contrast to recent years, the markets enter the second half of 2017 without the pall of Greek debt crises or Brexit weighing on sentiment. The relative calm should enable investors to focus on the health of the global economy and corporate profits.

Attention will now shift to the upcoming second quarter earnings season as companies provide updated outlooks for the remainder of the year. With the downturn in oil prices, companies in the Energy sector will be in focus; investors will look for updates on the current environment as well as managements’ expectations for near-term and longer-term activity. Overall, companies in the S&P 500® Index are expected to grow sales by 4.7% and earnings per share by 6.5%; the technology sector is forecast to lead earnings growth at 10.3%, followed by financials at 6.2%. The continued expansion in corporate profits, in combination with an improving global economic outlook, should sustain the market’s positive bias over the second half of the year.

Trading should be slower during the holiday-shortened week. The June employment report is released at week's end. The unemployment rate has fallen over the past few months, but so has the number of new hires. Wage inflation has been moderate at best and isn't expected to pick up steam any time soon.