Markets still firm and climbing the wall of worries, but Energy continues its selloff...

Stocks were flat-to-higher last week in relatively quiet trading as investors looked ahead to second quarter earnings season. A rebound in technology stocks drove the NASDAQ to outperform while the energy sector underperformed (more on this in our Market Week commentary). The release of the Senate’s draft version of an Obamacare repeal and replacement bill dominated headlines. Early criticism by Senate Republicans suggests that the proposed legislation may not garner sufficient support to pass. For now, investors are not yet imputing any outcome in health care reform. 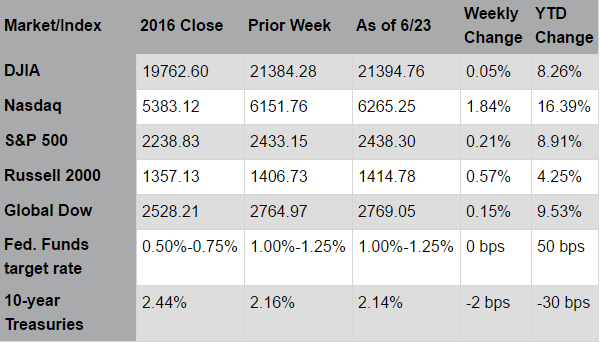 On Thursday, the Federal Reserve performed its annual Comprehensive Capital Analysis and Review (CCAR), also known as the bank “stress test.” All 34 of the largest U.S. banks passed the examination; one test, a “severely adverse” scenario, featured a global recession with U.S. unemployment rates jumping to 10% and distressed commercial real estate market conditions. The positive results evidence the improved condition, post-financial crisis, of the country’s largest banks. The significant progress raises the possibility that the Fed may relax some of its capital rules; the upshot would be increased lending activity, especially to potential borrowers that had been neglected due to the strict capital requirements.

Energy stocks fell as oil prices declined for a fifth consecutive week; Brent crude oil, the international benchmark, has retreated more than 15% since OPEC’s agreement in May to extend production cuts. Investors are concerned by increased output from Nigeria and Libya (both of which are exempt from the OPEC deal), and a growing number of active drilling rigs in the U.S. Yet, the Energy Information Administration’s weekly inventory report showed that U.S. stockpiles, while still elevated, are receding. And, Iran’s oil minister stated that OPEC is contemplating deeper cuts to reduce the global inventory overhang. The reality is that, due to labor and equipment shortages, many of the recently-drilled shale wells are unlikely to be brought online in the near-term. These drilled-but-uncompleted wells (DUCs, in industry parlance) hit an all-time high in May. The current economics of shale oil point to a break-even price range of $40 to $60 per barrel; and, in contrast to prior years, most shale producers have not locked in higher prices for their production. Thus, as oil prices are near the low end of the break-even range, we anticipate that companies will respond by curtailing activity until prices recover. Indeed, oil prices themselves may be the catalyst to bringing supply into balance.

The final week of the month and second quarter offers a last look at the rate of economic growth with the release of the final report for the first-quarter GDP. Inflation is slowing, a trend that is expected to carry over to consumer income and spending as detailed in this week's May report on personal income and outlays.